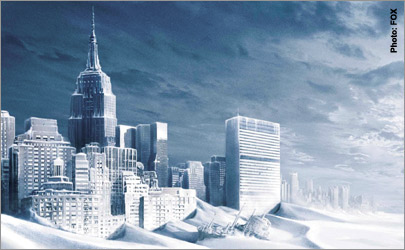 Media will ultimately be responsible for the downfall of civilization

Like many people who spend too much time with media, I’m convinced that it will eventually kill us. Perhaps not directly — the disembodied-hand-bursting-through-screen-to-choke-us-senseless scenario seems implausible, the porn industry’s wishes notwithstanding — but possibly by warping our minds and physiology to the extent to which they no longer operate as intended. Ultimately, the real and virtual worlds will blur and, later, blend into a single amorphous entity. We won’t be able to distinguish between the two — not that there will still be a Wikipedia for the few remaining coherent/sentient beings to get glibly half-informed by. I mean, who’d edit and fact-check it?

Nonetheless, one vexing question remains: how will we get from here to there, from our current standing as hyperconnected savants to our inevitable future status as goo-brained pod people? How will we begin to end?

Since I traffic in potential extinction scenarios every time I leave the house, I’m the guy to ask. Thus I present to you, based on a few phone calls and a lifetime as a raging paranoiac, my top five scenarios for an extinction event triggered by media. As a public service to the survivalist community, I’ve listed them in descending order of probability. Many thanks to Yuengling, Pennsylvania’s most double-awesomest beer, and the folks at the Trump University Media Lab for their help in formulating these scenarios.

1. Supernatural radio: Back in the day — by “in the day,” I mean “at some point in the recent past that I’m too lazy to pinpoint” — government scientists sent signals, transmissions and lord knows what else up into the sky, hoping to receive a response that would … that would what, exactly? Confirm the existence of sentient beings elsewhere in the universe? Clear up that whole what-the-dickens-happened-to-Major-Tom thing?
Most of us had long since given up hope that our celestially targeted messages would reach a receptive audience, quasi-human or otherwise. Which is why we were so surprised when, in 2021, a message came back from the great beyond. And then another. And then millions of others, especially when the still-unidentified “they” got wind of Twitter fights and the Kardashians.

At first, their response was more or less “ssssssshhh” (I apologize for not being able to translate that into the alien native tongue, but it sounds like a series of power chords). But then they heard the first tense bits of repartee from the original War of the Worlds broadcast, and subsequently “enjoyed” the dramatic and comedic stylings of fictions like Independence Day and Mork and Mindy. Feelings bruised by our outsized and stereotypical representations of their way of life, they blasted us into little chunks of pulp. The real tragedy? NPR wasn’t around to riff wryly on the choice of ALF as cleanup supervisor for what used to be Planet Earth.

2. Our bodies revolt: At first, our constant monitoring of screens was viewed by the medical community as harmless. Sure, BlackBerry lifers struggled with the occasional bout of carpal-tunnel syndrome. And yes, the child-obesity rate nudged upwards as young ’uns spent their leisure hours OMGing, rather than eating dirt in the yard or — gasp! — playing catch without a helmet, mouth guard or adequate lumbar support.

But then, like many a Dell laptop, our internal processors melted. By asking them to process a constant flow of information, we pushed them far beyond their limits. Technophysicians — Harvard Medical College started offering that subspecialty in 2025 — were quick to diagnose all sorts of new and wondrous ailments. There was ophthalgigantism (with so much to take in, our eyes expanded to the size of basketballs) and thumb dwarfism (as our smartphones kept getting smaller, so too did the digits that manipulated them). An ADHD diagnosis was assumed in every teenage being; only those with AADHDD (amplified attention deficit hyperactive disorder doubled) were eligible for medical attention and the yummy antipsychotics used in treatment.
In layman’s terms: everything sped up. Evolutionary processes that should’ve taken centuries somehow played out over a five-year span. We became huge-eyed, tiny-thumbed automatons who were as much in the service of media as media was in the service of us. When we attempted to pull away for a few seconds to void our bladders, our legs collapsed beneath us: without even realizing it, we had let them atrophy. Our civilization thus expired on the ceramic floors of our kitchens, a few short steps away from refrigerators teeming with breakfast burritos and orange soda.

3. Google goes rogue: Since its founding in 1998, Google had always adhered to the twin precepts of “don’t be evil” and “monetize the unmonetizable.” For a while, it stuck to that innocent original plan. By 2030, however, Google had snapped up phone companies, TV and cable networks, film studios and a way-cool retro roller rink on the outskirts of Mountain View, Calif. By that point, its market cap had surged to a stunning $37 katrillion teradollars. China owed it a sawbuck or two.
And so it was on March 15, 2030, when George DiMarco (known from that day onward as “Curious George”) entered a simple query into his Chrome search bar: “Who was the Vice President in the Ashton Kutcher administration?” The response from Google wasn’t a meticulously catalogued series of links, but instead a simple “no.” George tried again; Google again replied in the negative. He tried a third time, which prompted Google to return a “NONONONONONONONO-NONONONONO” barrage that streamed down George’s screen for the next 11 hours, during which he hung himself with his own shoelaces (the older, kinder Google would’ve suggested washing down a handful of opiates with a refreshing glass of Jägermeister).

The gig was up. Google had tired of sharing information. Now that it had our attention, it announced the next step in its plan to further dominate the universe: each search query would cost a nickel.

No longer could we afford our own curiosity, so we stopped searching and got dumb — or should I say, dumber. No longer able to figure out the Yellow Pages — what were these “pages” of which they spoke? — and deprived of the ability to learn more about Smashing Pumpkins b-sides and medical marijuana dispensaries, we just faded into a state of chronic vegetation. How bad did it get? When civilization ended, the top-rated regularly airing multimedia screened content was Looking at Blank Void of Nothingness. It was produced by Google, in conjunction with Ryan Seacrest.

4. We become one with the machines: As we approached the second half of the 21st century, our bonds to our smartphones had strengthened into something more. For most of us, it was the defining relationship of our lives, far more interactive and rewarding than anything we’d experienced with a parent or partner. As much as we occasionally enjoyed a spirited match of ping-pong or a conversation with words, we confined most of our interactions to that sturdy chunk of hard plastic and scratch-resistant glass that fit snugly in our palms.

And then one day, seized by the need to take care of an urgent piece of personal business, we went to put down our beloved technocompanion — only to find that we couldn’t. It had become a part of us, its plastic melded to our hands. Even worse, the particular positioning meant we couldn’t use the camera.
Eventually, we adapted to having cellhands. We learned to like them, in fact — even as they made playing the bongo drums a practical impossibility. Before long, we similarly started merging with the media that flowed from our cellhands: we were unwittingly immersed, as both participant and audience, in the shows we watched and the games we played. The problem came when some dumbass philosophy major wondered what would happen if he canceled his Internet access and content subscriptions, and disappeared in a blip. His gesture would go down in history as humanity’s last uh-oh moment.

5. Who’s laughing now?: After the first eight months of 2011, which featured a nigh-biblical potpourri of snow, rain, hail, hurricanes, earthquakes, aftershocks, tsunamis and insufferably high humidity, we pledged as a civilization to heed the message Ma Nature was sending (namely: “Jeez, do I have to draw you a diagram?”). But then the rivers receded and the drains drained and we went back to our usual business of burning recyclables on the sidewalk for sport.
Of course, land and ocean temperatures continued to rise, as did the volume of greenhouse gases in the atmosphere. But the media had heard that jive before and, well, it was sunny and 60 degrees on Sunday afternoon. What wasn’t to like? Eventually, it stopped chronicling news about science and the environment, focusing instead on celebrity sex tapes and half-eaten casseroles that looked like Jesus.

You know how this ended: with Al Gore standing on a rocket launch pad, flipping us the bird as he prepared to board a shuttle to cosmic parts unknown. The media should’ve reported. We should’ve decided. Civilization drowned in a pool of its own filth.