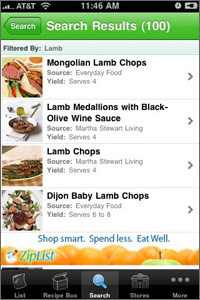 Ziplist has become a popular tool for grocery shopping and organizing recipes online and on mobile phones. Now the system is set to gain additional exposure from celebrity chef Ming Tsai, who has added Ziplist as a high-tech ingredient for the 10th season of his PBS cooking show “Simply Ming.”

A message that pops up on the TV screen during airing allows viewers to text to “Recipe” (732473) to save featured recipes to their own recipe box. Users can also choose to add a recipe’s ingredients to a Ming-branded grocery list they can bring to the store via mobile instead of needing to print it out.

The Ziplist system automatically categorizes the items by product type to make shopping easier via mobile in stores. The goal is to save viewers the trouble of having to write down recipes while they watch the show or even having to go to the “Simply Ming” site afterward.

“People want everything instantly now…so with this technology they know they can not only get the recipe, they can get the shopping list immediately,” said Tsai. The show’s host said he was sold on the concept after Ziplist founder and CEO Geoff Allen walked him through a demonstration earlier this year.

Allen said Ziplist plans to add the text-to-recipe feature to a show hosted by another celebrity chef on another network, with more similar deals in the works. Given that Martha Stewart Living Omnimedia is already an online partner and minority investor in Ziplist, a mobile tie-in with her TV show would not be surprising, either.

The difference with shows on networks other than PBS will be the ability to integrate advertising into the feature. Brands will have the opportunity to place ads in the text-message response, the text landing page, and a click-through ad on the recipe detail page.

In addition to TV chefs, the company is also testing the technology next month in a national ad campaign for a CPG brand in connection with holiday cooking. Ziplist essentially allows users to register online to create shopping lists from its database of 275,000 items and store personal recipes, collect them from around the Web, or search a catalog of recipes from its partner sites. People can also share recipes via social tools like Facebook and Twitter as well as email. They can add and remove items via the Web, text message, email or instant message, and sync up lists to most regular phones and smartphones via Ziplist’s smartphone apps for the iPhone and Android devices for in-shore shopping.

The app also includes a barcode scanner to scan items at home to add to a grocery shopping list. To date, the service has attracted some 500,000 users as it gears up to monetize its growing user base with advertising, coupons and offers targeted to people’s shopping habits.

“There’s absolutely no better indicator of purchase intent than knowing exactly what you put on your shopping list,” said Allen. “You never put anything on your shopping list that you don’t intend to buy.” Right now, Allen said he is focused on expanding Ziplist’s network of 40 partner sites and counting, which includes publishers like Martha Stewart, Woman’s Day and The Daily Meal along with 1,800 food-related blogs.

Ziplist technology powers recipe boxes and shopping lists on these sites and provides a single login for that information across the network. Ziplist has ad revenue sharing agreements with outside sites, promising that its recipe and shopping services will help drive up page views and interaction, creating more ad inventory. That user data is also shared with partner sites.

“We have no doubt of the ability to monetize this with highly personalized promotional coupons and advertising,” said Allen.