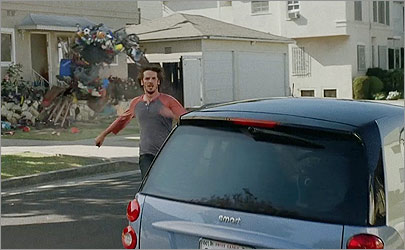 The first TV spot for Smart -- launched in July, soon after sibling Mercedes-Benz USA took control of the brand from Penske Auto Group -- shows a vignette of executives, TV announcers and personalities, celebrities and the like chattering away. They are all, however, merely repeating the word "big." At the end of the spot, a junior executive in a boardroom, listening to his boss say "big" over and over again, glances out the window, sees the Smart and says "small," which makes everyone stop and listen.

That ad might be something of a metaphor for what Smart has needed and what the company hopes the new campaign gives it: share of voice. Smart sold only 2,556 vehicles in the first six months of the year, representing nearly a 25% drop versus the first half of 2010. The approach may be working: Smart reported an uptick last month versus last September: 469 ForTwo cars delivered, compared to 422 vehicles sold in September 2010.

With the new ad, the "rethink" theme offers a supernatural take on the horrors of hoarding and the virtues of the simplified life. A 20-something guy is in his kitchen when a drawer full of kitchen utensils opens, he bangs against it, then moves the other way to avoid it when another drawer slides open, stuffed with remotes and knickknacks. Horrified, he runs out of the kitchen and is attacked by his appliances, toys, coats, sporting goods, scarves, skis, TV, and lots of, well, "stuff" that forms a malicious mountain in his living room and threatens to swallow him.

He runs for the door, which is suddenly blocked by his bureau. A pair of skis thwarts him and he falls against the mountain of belongings, gets up, sprints for the back door and escapes. Once in his yard, he gazes with relief at what turns out to be his Smart car. He gets in just as a "Transformers"-like giant comprising his belongings heads toward the car.

He starts the engine and the belongings/giant collapses in the street as the Smart drives away. Voiceover: "The tight-turning, space-saving, eco-friendly Smart. Escape your stuff." Tag: Unclutter. Uncar.

The company, based in Mercedes-Benz USA headquarters at Montvale, N.J., markets gasoline and electric versions of its ForTwo coupe and cabriolet in the U.S., and will have those vehicles on show at Austin's Fun Fun Fun Fest over three days in early November. The festival focuses on lesser-known artists in genres like punk, indie rock, hip-hop, electronic music and comedy. The event will feature Spoon, Passion Pit, Lykke Li, Slayer, Public Enemy, Major Lazer, Odd Future, Henry Rollins and Reggie Watts.

The automaker will have several vehicles on display and will be included in all of the festival's advertising, public relations and social media activities, per the company.

The company says the idea is to associate the car with what's next in culture and has been involved in Mercedes-Benz Fashion Week as well as arts and sustainability programs.

The Smart ForTwo has had a tough go of it in a market where competition for subcompact vehicles is heating up dramatically. High gasoline prices and a renewed attention on the subcompact or b-segment auto market have fueled several new entrants over the past couple of years: Ford Fiesta, Nissan Versa, Honda Fit, Toyota Yaris, the latest Hyundai Accent, and now the Fiat 500 and Chevrolet Sonic. All offer four seats and some offer 40-mpg highway, leaving Smart scant room to carve out its niche for an already narrow market for two-seaters.

Smart starts at around $13,000, but Chevrolet is offering a version of the Sonic for $14,000 and change, for example. The new Hyundai Accent is in the same neighborhood.