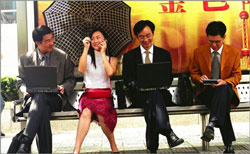 According to the study, the average Chinese consumer spends 3.25 hours a day online compared to 2.21 hours watching TV. And the heaviest online activity was seen in so-called “tier three” zones in the country, or medium-sized cities, where online consumption averaged close to 3.6 hours a day.

Video content viewing accounts for more than half of the online activity, the study found, with consumers watching about 1.76 hours of video a day on their computers. The study concluded that it is highly possible that online will become the most-used vehicle for accessing video content for consumers living in all but the most rural sections of China.

“There is a growing population of netizens in lower tiers who do not even have a TV set at home and instead are choosing to watch most of their video content online," Tan said.

The SMG report, entitled the Yangtze Study, took an in-depth look at Chinese consumer and media habits, motivations and values. Researchers conducted hour-long in-person interviews with 13,500 consumers ages 13 to 45 across the country from the most urban to the most rural regions. In addition, a qualitative phase of the project included in-home and school visits and shopping and leisure “tag-alongs” to witness consumer behavior.

A key insight, the study found, is the importance of family in Chinese society, with 81% of respondents saying that family is more important than a career.

The study also found that the notion of happiness is not consistent throughout the country. In the biggest cities, for example, 64% said they regarded money as a measure of happiness and success. But in smaller towns only 42% said that was the case.

Another insight from the report: celebrities boost engagement with brands. An almost universal response across all tiers is that when a celebrity is involved with a brand, they will pay attention to that brand.

But brand perceptions vary, with consumers in more urban and affluent areas more likely to link brands to social status. In the biggest cities, 62% of respondents said a famous brand could help improve social status, while just 41% of consumers residing in rural areas expressed that opinion.

As China's consumer economy rapidly expands, more agencies and marketers are devoting greater effort to growing market share in the country. Bertilla Teo, CEO of SMG Greater China, said the in-depth study would help clients understand more fully the evolving consumer culture there, particularly outside of the most affluent and better-known urban centers.