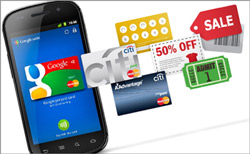 This year, the majority of phones sold in the U.S. were smartphones. Last year, smartphones and tablets outsold PCs globally. And while it took 15 years for e-commerce to reach 5% of retail sales, Hilding Anderson, senior manager of research and insight at SapientNitro, tells Marketing Daily mobile will be at that level in three to five years.

“The first phase of mobile commerce is going to be about time-sensitive deals. But already, 20% of sales to Millennials are through mobile devices, and half of this is through tablets,” he says.

SapientNitro's “Insights 2012” report, which drives into the dicey intersection of mobile technology and marketing, is bifurcated into a proprietary survey of executives in the mobile space, and a thought-leader section of articles on media and marketing by Sapient Nitro visionaries.

At the core of the first section is data from a survey of 23 mobile professionals that was used to rank companies across four categories: mobile wallet, in-store mobile, integrated experiences, and location-based technology.  Each category entrant was "graded" on heuristics (ease-of-use, feature set, and design); the mobile professional review (familiarity and importance); and Sapient Nitro's own ranking of the companies' strategic importance. A fifth category, emerging technology, ranks general technological trends based on the same parameters (minus heuristics).

Google Wallet had the highest scores in the mobile wallet category. "The digital wallet is the wallet of the future," says Anderson, "because it can integrate with loyalty cards and digital receipts. It's a win both for consumers and for retailers: retailers can intercept people with loyalty programs applied at transaction. What gets exciting for consumer retention is the loyalty and digital receipt piece. If someone likes Hugo Boss and they get a message through their digital wallet (integrated with a smartphone) that before five today everything is 30% off, that person will get pulled into the store."

He explains that doing timely offers through a mobile wallet is more effective than doing a broad text campaign because you can target good customers. EBay’s Paypal mobile app and Starbucks’ Mobile app were second and third in the category. The top in-store mobile program in the study was the Apple Store app, followed by the Home Depot app and Best Buy Reward Zone app.

In the integrated experiences category, Amazon Kindle, USAA, and Delta Airline kiosks were the leading brands. "What we liked about USAA was way they enhanced all of their digital products to allow you to better connect with the bank."

Anderson explains that USAA has unique challenges because it doesn’t have branches. "Yet, they compete with massive banks. They were the first to allow consumers to deposit up to $10,000 per day via mobile devices. "They really have figured out how to let you use digital devices to connect with the bank. And it works on PC, mobile, tablet. It lets you do new things across channels. They also have a fantastic call center, so it gets back to the importance of transmedia."

Anderson says the airlines are the opposite of USAA in that they were forced to offer digital solutions. "They were driven by the market. Airline kiosks were originally visualized as a cost-cutting measure."

Amazon Kindle, the top-scoring multichannel experience, stands out, says Anderson, because from a consumer perspective it can be acquired on a range of devices. "They are letting you do what you need to do using any device at your disposal," says Anderson.

mobile, research, technology
1 comment about "Mobile No Outrigger On Multichannel Marketing Ship".
Check to receive email when comments are posted.
Next story loading