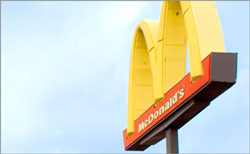 The world’s largest and most-recognizable fast-food chain is bringing entertainment, news, sports and video content to diners, creating a substantial advertising platform in the process. McDonald’s is launching McTV in partnership with ChannelPort Communications.

The McTV network will be installed in 800 McDonald’s restaurants around Southern California and Las Vegas, reaching 18 to 20 million viewers per month, according to ChannelPort.

The network could go national if it proves profitable, according to the Los Angeles Times. McTV will feature entertainment content from BBC America, local news, and a variety of local-focused content produced by Vimby through its partnerships with local filmmakers in dozens of cities around the country.

The Vimby content will include profiles of high school and college athletes and working mothers from the local community, as well as content covering fashion, art, music, nightlife, lifestyle and culture. Content will be broadcast on high-def screens, measuring 42 to 46 inches, located near dine-in seating areas.

This isn’t the first attempt to create a digital out-of-home video network piggybacking on the iconic fast-food chain’s numerous venues. Turner Broadcasting tried to develop a place-based video network serving McDonald’s locations back in the early 1990s, but the project ran aground on financial and logistical obstacles.

More recently, in 2006 Akoo launched m-Venue, which allowed customers to order free music and video content from their mobile phones, which was then played on digital displays in McDonald’s restaurants, as well as other types of venues. Akoo subsequently refined its business strategy to focus on mall food courts and college dining halls.

However, the idea of DOOH networks serving fast-food and casual dining restaurant chains has taken root rapidly in recent years. In June, Taco Bell agreed to install an ad-supported video network throughout its 5,600 locations nationwide, through a partnership with Indoor Direct, whose video network (before the addition of Taco Bell) reached 1,036 locations, including franchises for Denny’s, Carl Jr.’s, Hardees, and Wendy’s.