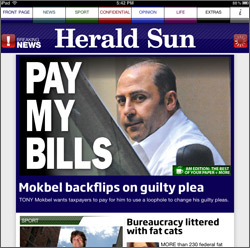 Four of the top 10 apps in the newspaper category come from Australia, according to McPheters & Company’s iMonitor qualitative rankings of the best tablet apps from media companies.

Only two U.S. brands, The San Francisco Chronicle for iPad and The Wall Street Journal make the cut. McPheters’ iMonitor evaluates and tracks over 3500 media branded apps on tablets, rating them according to design, functionality and their use of rich media content. On a scale with a top rating potential of 15, 10 newspaper apps have achieved a 14.5 rating.

In the top ten, Australian entries include the Herald Sun, The Age, The Courier-Mail and the Sydney Morning Herald. Two top apps come from the UK: MailOnline for iPad and Sunday Times for iPad. The BILD HD app from Germany and El Pais from Spain round out the list.

Notably missing from the top 10 are USA Today, which launched with the iPad, and Financial Times, which has among the most advanced HTML5 Web app treatments among newspapers. USA Today did not rank among the top newspaper apps in the iMonitor scale, and FT removed itself from the App Store after reverting to an HTML5 model months ago.

Why the relative dearth of U.S. pubs, given that it was the first market to get the iPad originally?

Rebecca McPheters, President of McPheters & Co., tells Online Media Daily, “While there are a lot of very high-quality apps from the U.S., we have consistently seen that a disproportionate share of the innovation in publication-related apps has come from abroad. Apps are a truly global medium, and no country or developer has a corner on innovation.”

In fact, Australia has News Corp, which is responsible for four of the top 10 ranked newspaper apps, including WSJ. McPheters says the company has been doing good work across all of its borders.

The paid model is grabbing hold in newspaper apps. According to McPheters’ index of U.S. newspapers in the app Store, 4% charge up front for the app itself and 9% charge by the issue for a typical price of $.50. But subscription models account for 37% of American newspapers. The most expensive is The Wall Street Journal, whose annualized fee is $207.48. The cheapest? The Miami Herald, which only costs $11.88 a year to access via the iPad.

The iMonitor started indexing and rating tablet apps in September 2010. McPheters maintains a catalog of particulars on these apps, collected from 60 countries, and provides evaluations. Its design rating considers navigation elements and whether the app enhances the original print experience.

The functionality rating evaluates download speed and reliability. And a media rating scores the use of links, video and interactive elements. Separately from these three qualitative measures, which add up to an App Score, the iMonitor also rates the quality of interactive advertising in an app.