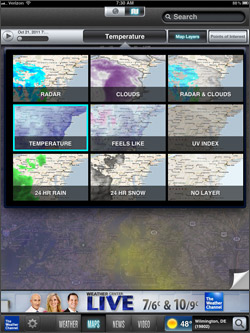 when I saw this week ads for “A Very Harold & Kumar 3D Christmas” coming soon to theaters. I am waiting for the iMax version myself. My hope is that this film signals a deserved descent of the 3D wave into self-parody. The trailer appeared to be a self-consciously silly parade of sequences planned and optimized for their 3D effect, playing on the audience’s built-in cynicism about the gimmickry being foisted on them as Hollywood’s next big thing.

And so when the Weather Channel released its first major revamp of the ubiquitous iPad app as “All-New Interactive 3D,” I cringed. Thankfully, the empty hype is contained in a single forgettable feature, a touchable globe rendered in 3D that contains the push pins for your favorites. I imagine world weather fans will like seeing the full global weather picture with a swipe, but I will forget it is there in a week.

The new Weather Channel app is a total rethink of what came before. This time the cable channel doesn’t just scrape the must-have weather data off of the top of its Web site, but instead offers a console for weather nuts. You can swipe easily though a 10-day forecast and drill into 15-minute increments. There is the now de rigueur social media integration for sharing weather photos or tracking the tweets of the on-air celebs. And maps -- oh, there are maps and overlays that will keep the weather dweeb absorbed.

What is interesting here from a media and marketing perspective is how effectively the app works as a promotional tool for the channel itself. Apps have a compactness and a focus that eluded Web sites. Web sites tend towards sprawl. Stuff just keeps getting added over time, and even redesigns somehow have to mash all of that accumulated stuff into new shape. Apps are designed more holistically, and so can achieve a more concentrated effect.

Weather channel’s app it is a good example of using an app to make a better case for the range of programming the cable channel offers. I am one of those weather-averse types who just wants the temp and likelihood of rain. All of these Weather Channel specials and documentaries get in my way. The Web site is too cluttered for me, too. Mobile is my default mode, and in the evening when my wife asks about tomorrow’s weather, the iPad is the main route to The Weather Channel.

But to their credit, the app makes a good case for the brand as something more. Content from all of those weather watchers is pulled in nicely and aggregated, along with clips from the various shows.  Holy crap, there is some really good nature programming here. Coast guards in Alaska, rock climbing. Gorgeous photography. Huh.

The Weather Channel app does explore a third dimension after all, and I don’t mean the cheesy throwaway spinning globe feature. The app leverages the inherent advantages of apps – compactness, navigability, focus of attention – to stack up the many attributes  of this media brand so they can be seen all at once in a way not available on TV or even the Web.  Lesson to all: The dimensions of your media brand can be more effectively communicated on the app platform, because you can show users the various planes of your content in a single glance.