Griffin Dunks Again For Kia, But This Time On Skates 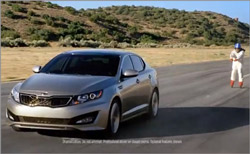 Kia has brought back NBA All-Star Blake Griffin, who was featured in the Kia Optima ad, where, during the 2011 NBA Sprite All-Star Slam Dunk contest, he leaped over the car to score a dunk.

Kia is launching a new spot, "Time to Shine," a 30-second ad wherein Griffin, who plays for the L.A. Clippers, appears to be towed by a speeding Optima (he’s wearing inline skates) to a 45-degree ramp that hurls him into the air, through which he soars head over heels, catches a basketball shot from a cannon, then dunks the ball through a 45-foot-high hoop.

Unlike the original spot, however, there's (obviously) a lot of graphical manipulation in this one. The ad ends with "Kia Optima and Blake Griffin: Taking things to the next level."

Kia says the ad, via David&Goliath, started on www.youtube.com/Kia before making its small-screen debut on Friday via a media buy on prime time, late night and cable programming.

Kia says Griffin is the only current professional basketball player who has a global marketing relationship with an automaker. Griffin will continue to be featured in upcoming Kia broadcast commercials throughout the fall.

In his role as a global spokesperson for Kia Motors, Griffin is both in the company's advertising materials as well as at events, and he makes public appearances on behalf of the brand, He also is involved in exclusive product promotions, social media engagements and philanthropic initiatives on behalf of Kia.

In June this year, Kia signed Griffin to the global spokesperson role in a multiyear deal. Kia said videos of the original dunk went viral.

Earlier this month, Kia took top honors for owner loyalty in Experian Automotive’s report based on new-vehicle registrations. Experian found that Kia garnered 47.9% loyalty, meaning nearly half of its 54,268 owners went back to Kia showrooms for a new vehicle. The Korean brand’s Forte compact sedan had 67.7% loyalty, the highest of any vehicle model in the U.S.

The Irvine, Calif.-based automaker had its best-ever September for sales, delivering 35,609 units -- 18.4% more than the month last year -- and its 13th straight monthly sales record. Year-to-date sales were up 37.1%. The Optima constituted 6,191 units sold by the automaker in the U.S. last month.