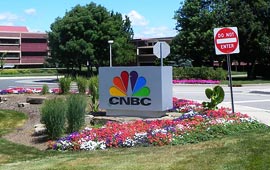 CNBC, which has long sought to quantify its significant viewing in offices and on trading floors, has signed a deal with Arbitron to use its out-of-home TV measurement service. The financial news outlet joins a host of Turner networks receiving the data, which is drawn from an Arbitron panel of about 70,000 people using portable people meters.

The service gives CNBC a chance to “quantify a previously unmeasured audience of young and affluent viewers who watch CNBC at work,” said Arbitron COO Sean Creamer on an investor call Tuesday.

In addition, Arbitron said ESPN has signed a new three-year deal to use Arbitron data for insight into cross-platform consumption of college football and NFL games -- on TV and radio. That includes TV and radio in and out of the home.

A study on cross-platform usage of TV, online and mobile for the Coalition for Innovative Media Measurement should yield an initial report in the next few weeks, Arbitron said.

Known for its radio ratings service, Arbitron continues to tout the growth opportunity in leveraging its portable people meter (PPM) technology to deliver insight into cross-platform measurement, such as its ESPN arrangement.

The company is continuing to push into mobile measurement after the summer acquisition of Zokem Oy, a Finland-based firm specializing in the capability. Zokem has been renamed Arbitron Mobile.

In radio, Arbitron is developing a “total radio” service with AdsWizz to measure radio listening that takes place in traditional fashion and online, which it hopes will yield revenues from current broadcast clients and digital music services.

Arbitron is also looking to bolster its radio measurement partly through “exploration of a Web-based alternative to the paper and pencil diary,” Creamer said.

Arbitron reported a revenue increase in the third quarter of 6.1% to $105.6 million, and profit was up to $15.4 million compared to $11.3 million in the same period last year.