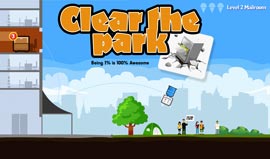 One of the advantages of app-based gaming is the lower barrier to entry relative to traditional console games. As the living-room game boxes became ever more technically capable, they called for design sophistication and production values that have constrained creativity at many major publishers.

When game development budgets rival feature films, it is not surprising to see the industry veer toward the sure-thing franchises and sequels common to Hollywood. Mobile game development is a bargain in comparison to other video game platforms. As a result, there is a flowering of creativity, and arguably a greater range of artistic expression.

Spur of the Moment Games announced this week it is developing a mobile game designed partly to support the Occupy Wall Street movement with both funds and satire. “Clear the Park” will be an iOS and Android game that  allows you to play a high-profile and apparently seething corporate executive who wants to clear the nearby park of protesters because they are ruining his view.

Your company stock increases as you come up with successful tactics for scaring or luring them from their occupation. You might toss watercoolers out the window at them or try negotiation. If you lose, then the protesters get to set up a Ken & Gerri’s Ice Cream Shop out of your former office building.

Some of the proceeds of the game will be donated to the Occupy movement in the form of gift cards that protesters can use to buy necessities while they protest.

Playing on the “99%” slogan adopted by many Wall Street occupiers, the game’s tagline is “Being 1% is 100% Awesome.” “It is all in good fun, but with an underlying sarcasm,” say co-creators Brad Thorne and Jerry Broughton. Thorne says there is an opportunity for games to widen their scope. Mobile has introduced more affordable means of production and distribution than ever before.

“It is an art form if you want to express yourself in a game, and not do what everyone else is doing. You can now push out a more consistent product faster,” Thorne says. “Henry Ford would be proud.”

The longtime Web developers have never deployed a game before but they say it is on track for a November release. “We have some PlayStation expatriates helping,” he says.

In fact, Thorne and Broughton have much more ambitious plans for blending gaming and hot issues. They are developing a project called NewsPlay that ties breaking news headlines in with topically relevant casual game play. Thorne envisions a “Daily Show” style of delivery. but in a mobile gaming format where real-world news is included in an entertaining and often satirical package of casual games. He sees a market for this approach in the post-newspaper era where many young people get more of their news from Jon Stewart than from the networks. “We are carrying mobile phones, but just making them mimic 200 year-old newspapers and just reading headlines. Yet we make interactive books for children on mobile.“

He envisions news + gaming as a kind of mobilized, interactive political cartoon, a way of communicating news that is both funny and insightful. And perhaps it opens up a hybrid model for digital news that seems to have eluded many media companies thus far. After all, as Thorne points out, “people won’t pay for news content, but they will pay for games.”