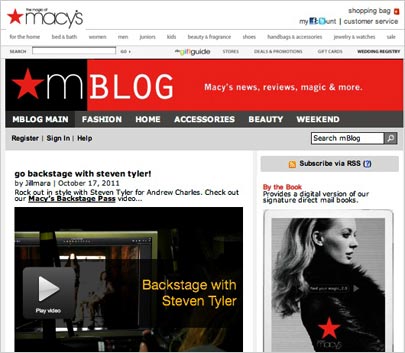 Looks like Macy’s, which has steadily been expanding its digital offerings in recent months, is in the blogging business, too. The department store chain says its mBLOG will include content from such popular bloggers as Fashionista.com and FoodRepublic.com, as well as Macy’s style experts.

Blogging partners will provide how-to videos, trend-spotting, user and expert reviews, and original posts; Macy’s will use the forum to showcase in-store events and sales. The Cincinnati-based chain says each day of the week will be devoted to a different subject, such as Women’s Fashion on Mondays and Home on Wednesdays, and that e-commerce will be embedded in content so readers can click to buy.

In addition to content from FoodRepublic, celebrity chefs associated with Macy’s Culinary Council will also contribute recipes and expert tips.

Despite the uncertain economy, Macy’s is making consistent inroads with its core audience, especially online. In September, for example, its same-store sales rose 4.9%; online sales (which include both macys’com and blomingdales.com) soared 43.3%.

Macy’s is hardly the only retailer beefing up its e-commerce efforts. A study from shop.org, the online arm of the National Retail Federation, reports that online merchants have already invested in new technologies and site and service features for the holiday season, with 51% saying they have significantly invested in mobile-optimized Web sites, 19.6% reporting an investment in tablet device apps, and 35.3% significantly investing in QR codes in offline advertising, such as magazine ads and billboards. (Macy’s is currently running a TV ad campaign promoting the codes, which it has embedded into stars throughout stores, on Facebook, and on its Web site.) Of those online retailers who regularly use social media platforms, nearly three-quarters say they have already invested in their Facebook (72.5%) and Twitter (41.2%) accounts in advance of the holidays.

Separately, Macy's is also furthering its fashionista agenda with the latest in its limited-edition, designer capsules: The Giambattista Valli collection is now on sale, offering jet-set glamour in sequin-encrusted jackets and flirty blouses priced on average from $50-$150. And it has tapped Doo-Ri Chung as the next designer to take part in the series, scheduled to go on sale Feb.15.