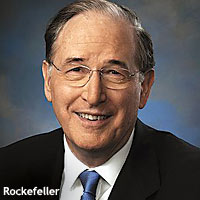 The head of the Senate Commerce Committee is questioning Visa and MasterCard about a press report that the companies are considering combining information about consumers' purchases with data about their online activity in order to send people targeted ads.

“As a general matter, I am already concerned that privacy protections afforded to American consumers in the commercial marketplace are inadequate, whether they are surfing the World Wide Web, using their smartphones, or shopping in their local supermarket,” Sen. Jay Rockefeller (D-W.Va.) said Thursday in a letter to Visa CEO Joseph Saunders.

“Allegations that Visa is contemplating a combination of information databases -- heretofore unconnected -- that would allow the company or nonaffiliated parties to build and maintain detailed consumer profiles of unprecedented proportions raise new concerns.”

Rockefeller sent a similar letter to MasterCard CEO Ajay Banga. The move stemmed from an article this week in The Wall Street Journal stating that MasterCard plans to sell marketers “an analysis of anonymous, aggregated data sorted into marketing 'segments,' such as people with a high propensity to be interested in international travel.”

MasterCard told the WSJ that it aggregates and analyzes details about 23 billion transactions a year, but that it does so anonymously. Visa reportedly is “pitching the ability to use cardholders' anonymous buying histories, in aggregate, to tailor the ads people see online” the WSJ reported. The source for that statement was an “ad executive who discussed the plan with a Visa official recently.”

The company also has applied for patents that involve tracking people who have entered their names or credit card information online,  then combining that personal information with “a broader profile of that user that includes that person's purchase history based on their credit-card transactions,” the newspaper wrote. Rockefeller is now asking the credit card companies to answer detailed questions about their plans.

“What is MasterCard currently contemplating with regard to combining customer purchasing data with other exogenous data sources, such as information from social networking sites,” Rockefeller asks in the letter to Banga. (The letter to Visa's Saunders poses a similar question.) The lawmaker also wants to know what kind of information the credit card companies collect about their customers' purchases, and how the financial companies intend to ensure that data about customers remains anonymous.

A MasterCard spokesperson said the company doesn't receive cardholder names or contact information with transactions, and doesn't link anonymous information to individuals. “MasterCard is confident that we are in a strong position to address Senator Rockefeller’s concerns,” the spokesperson said in an email to Online Media Daily.

Visa also said in a blog post on Thursday that the data it receives when processing transactions is anonymous and that any “trend data” it offers to marketers in the future won't include users' personal information.

“When Visa offers a product that uses account-specific information associated with a known consumer, such information will only be used with direct consumer permission,” the company said. Visa also characterized its patents for online targeting as “exploratory,” stating: “As we evaluate turning concepts into real products, you can be assured they will meet the same privacy and security standards as those products and services you already trust and know.”

Rockefeller earlier this year introduced legislation that would require ad networks and other companies to honor consumers' requests to opt out of online tracking. The Do-Not-Track Online Act directs the Federal Trade Commission to craft rules establishing standards for a universal do-not-track mechanism.