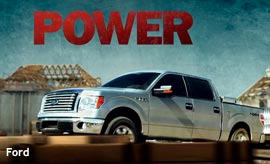 Ford is putting its F-150, Ranger and Super Duty trucks in the boxing ring in a trio of spots for the ongoing Built Ford Tough Sales Event.

The effort, produced by L.A.-based production house King and Country (K&C) for Ford’s WPP agency consortium Team Detroit, uses a "Main Event" prize fight as a central motif, and continues the rant-style voiceover that Ford has used in the clearance campaign since 2008, which features the no-BS voiceover of actor/comic Denis Leary.

Each of the new ads has one of the Ford truck models leaving a stadium after ostensibly fighting in a boxing match. In each spot for one of the three trucks, the camera pulls away from the truck showing a computer-generated landscape of construction projects. A ring girl holds up round cards promoting key features and a punching bag is banged with a one-two punch intended to embody the dual virtues of EcoBoost technology and J.D. Power & Associates' Initial Quality rankings for Ford pickups.

Drew Neujahr, K&C's head of production, said the company evolved the look of the 2010 Rant campaign from a 2D to 3D space, with the camera appearing to move across rugged terrains with CG buildings, construction environments and other landscape elements. "The new spots feature truck footage we shot on several locations last year, along with new footage where we shot the ring announcer and ring girl on green screen with practical props. We also created the boxing ring, banners and punching bag, all in CG," he said.

Said Team Detroit group creative director Todd Chumley: "'Rant' is easily one of the longest-running, most successful campaigns Ford has ever produced. Why? Because the spots keep getting better."

Last year, Nielsen reported that in 2008 and 2009, Ford's F-150 brand had garnered higher recognition versus the competitive set. Ford had 72% while the industry had 63%.

It’s no accident that fuel efficiency is part of the message, even for trucks. Typically, the pickup truck segment is insulated to some degree from fuel-economy needs of shoppers because pickup trucks need functionality that tends to sacrifice fuel efficiency. But Ford is touting a 20% improvement in fuel efficiency as a virtue of EcoBoost technology in the new ads.

Ford says a new study by Maritz Research justifies the tactic: fuel stinginess is now a primary purchase consideration among auto shoppers. The study says over 40% of consumers now view fuel economy as “extremely important” when considering a new vehicle purchase today. One-third of consumers say fuel economy has the “greatest impact” on their next purchase.