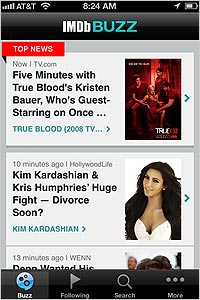 For years the Amazon-owned IMDb has been pretty much true to its own name: Internet Movie Database. The IMDb is the go-to place for recalling that movie Steve Buscemi was in, or whether Oliver Stone directed “JFK” before or after “The Doors,” or who was that guy (you know that guy) who played the young Don Vito’s best friend in “Godfather II”? (You know. The guy who was in the movie with the alligator and Ferris Bueller.)

Yes the IMDb has been the reliable source for the film and TV completist and the bar room bettor. But with mobile apps, the brand is stretching out from its database character and crafting an identity as a source for entertaining experiences, not just a resource for entertainment information.

IMDb Buzz is one of a growing line of apps from the brand. Available on Android and iOS, it aggregates news from multiple partners, including “Access Hollywood,” indieWire and theWrap, but it also ties that content in with its own database of celebrity images and filmographies. The user can create customized newsfeeds by “following” specific celebrities. An Android notifications feature will push alerts to the user when one of the followed celebs is updated with news.

IMDb recently aunched its trivia app that turns the database into a game. The company boasts that in less than a month, more than half a million people have downloaded the app and have played more than 60 million trivia questions.

Overall IMDb reports that its apps have been downloaded 27 million times. Its main app is the core IMDb database, which was also updated recently to include a Trailer Queue, better sharing tools and AirPlay compatibility.

IMDb’s app play is an example of how publishers are using the new platform to spin their core competencies into new areas. The magazine industry has been following this app strategy for a while. Conde Nast’s Vanity Fair, for instance has a challenging Hollywood trivia game for iOS that includes editor-in -chief Graydon Carter as a scolding bobble-head doll. Rodale has converted its bestselling “Eat This, Not That” book series into a mobile game as well. Apps allow traditional publishers to repackage their content -- and even reposition their relationship with users.