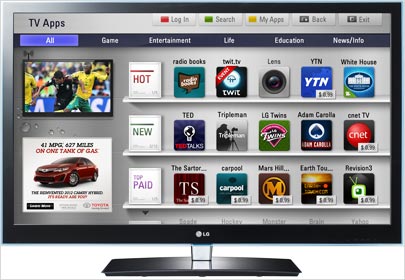 LG Electronics will begin rolling out an ad-serving platform for its Smart TVs, and provide an embedded software development kit from YuMe that allows developers to build applications that integrate ads. The advertising platform aims to strengthen the ecosystem of developers, publishers and users to create a network of developers who can create revenue through ad targeting. Toyota Motor Sales U.S.A. becomes the first video advertiser for the Internet-connected TVs. The campaign will launch this quarter.

The Embedded SDK powers the LG advertising platform. Similar to Google's idea to build out a network of Android applications for use on Google TV, LG plans to do the same, but will allow advertisers to serve up ads through these third-party apps. Ad units on the home page and search functions will serve up content. When someone clicks on the ad, the creative either launches a static secondary graphic or provides a call to action that leads the viewer to another site or launches an application.

"The partnership takes advantage of the technical innovation," said Matt Durgin, director of North American content partnerships for LG Electronics. "Consumers can click on the ad on the screen, driven by the motion remote. It eliminates challenges navigating around the user interface."

Durgin said the technology working inside the "intelligent engine" introduces ads to consumers in different ways than many are familiar with seeing, making it more interactive.

The platform will not serve content in live broadcasts, but rather will bring advertising capabilities into the connected device. Publishers will have access to real-time reporting and a host of other features. The LG ad platform, powered by YuMe’s ACE Relevance Engine, manages publisher ad inventory to optimize ad CPMs and supports a variety of ad sales models, including YuMe’s Connected Audience Network. The LG ad platform integrates into LG Smart TV HDTVs, Blu-ray Disc players, Smart TV Upgraders and other LG Smart TV platforms, Advertisers can run campaigns on these devices, as well as other connected CE devices participating in YuMe's Connected Audience Network.

LG has been manufacturing, shipping and selling connected TVs for about three years, but this is the first time it has brought an embedded ad platform into the devices. The TV comes with a proprietary search engine and applications. LG forecasts shipping 35 million connected TVs this year. By 2012, the company estimates the connected TV market will hold 65% of all TV shipments.

Embedding the ad monetization technology into the television provides consistency with the part of the device providing Internet connectivity. Expect the connected TV ad-serving platform in the future to link with mobile devices, but it's not there yet.

YuMe CEO Jayant Kadambi said it brings app developers and advertisers a customized ad platform. App developers can configure the ads to stream across apps when the consumer downloads onto the TV multiple applications. YuMe's platform creates a consistent stream of ads across all, so the viewer doesn't get bored seeing the same ads.

In the short term, the number of advertisements determined by the ad buys and how they are distributed will appear similar to live broadcast TV advertisements to make advertisers more comfortable. Advertisers will buy audiences, such as 18-to-34 age men. It's less about real-time bidding and pricing, and more about viewer experience, Kadambi said. Brand advertisers from consumer product goods to automotive still rely on reach and frequency, and content remains important.