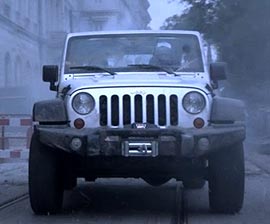 In its second year of a product-integration partnership with Activision's "Call of Duty" game franchise, Jeep is pulling out the stops for a national campaign touting a limited-edition Wrangler created to look and act like the Wrangler in “Call of Duty: Modern Warfare 3.” But the campaign is intended to promote Jeep Wrangler -- and more broadly, Jeep itself -- to a new audience, per Kim Adams House, head of Jeep advertising, Chrysler Group LLC.

House tells Marketing Daily that the "Call of Duty" partnership puts the off-road brand in front of 18- to-34-year-old males "with a gaming mindset looking for excitement and new ways of seeing things," she says. "The partnership with Activision gives us leverage and an opportunity to reach consumers who may not be familiar with the Jeep brand in a way that's organic to them." She says the numbers of fans of the game justify the campaign." About seven million people play the game every day."

The Chrysler LLC division's effort, via Jeep's AOR, Southfield, Mich.-based GlobalHue and Boston-based SapientNitro, which did digital marketing efforts, comprises broadcast, print, digital, social media, experiential and an out-of-home campaign. Like the special-edition Wrangler itself, the overall campaign imagery borrows from the world of the Activision war game.

The vehicle, dubbed "2012 Wrangler Call of Duty: MW3 Special Edition" is loaded with Mopar parts and accessories, paint and "Call of Duty" graphics that make it look like it rolled right out of the game's virtual battlescape.

Television ads for the campaign, which has the tag, "The toughest vehicle in the world. Any world," breaks on Nov. 7 on national and cable networks. Using imagery from “Call of Duty: Modern Warfare 3,” the ad shows the Jeep hero vehicle rolling through a chase sequence intertwined with other game-action elements. There are 60-second and two 30-second versions and a long-form ad and behind-the-scenes versions on the Jeep brand Web site (www.jeep.com).

In addition to traditional ads for magazines, the print campaign includes a three-dimensional piece that uses a Mylar overlay that merges the “real world” and the world of “Call of Duty: Modern Warfare 3.” House says the Mylar ads will be in publications like Xbox Magazine, Antenna and Complex, while normal multi-page ads with the same creative will be in a range of lifestyle magazines.

As for out-of-home, electroluminescent billboards will appear in Los Angeles, New York and Chicago that feature both day and night imagery. Mirroring the split-persona print ads, the billboards, which use low-voltage electro luminescent Light Tape lamps, show the Wrangler as "Toughest Vehicle In The World" (in real-world settings) during the day, but at night the vehicles are set in the game environment, and are touted as “Toughest Vehicles in the World. Any World.”

To launch the campaign Jeep will hold “Camp Tread” experiences at select GameStop locations in New York and Chicago, during the store's launch events on Nov. 7. Inside Camp Tread, field lights, ambient game soundtrack and special effects create a military environment, replete with uniformed "soldiers" from the fictive “Jeep 285,” in addition to interacting martially with the attendees, also provide an overview of the 2012 Jeep Wrangler Call of Duty vehicle.

House says the "Camp Tread" program, at which the vehicle itself will also be on display, is essentially a scaled-down version of what Jeep did at the inaugural two-day Call of Duty XP convention in Los Angeles in September.

"At Call of Duty XP, which brought in seven to eight thousand people, we took over a five-acre piece of land and developed a ride-and-drive to showcase elements of the game with stunt drivers, and even Navy SEALS," she says. "There was a five-hour wait for the attendees to engage in this. So what we have done is take an abbreviated piece of it, and will have it at two GameStop locations."