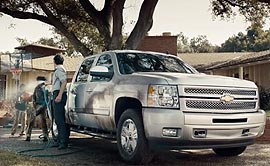 Forget minivans; pickup trucks -- especially crew cabs -- are the glue that holds families together. That might be a subplot for Chevrolet's Hispanic and general market campaign for the 2012 Silverado pickup. The automaker is reaching out to Hispanics with new ads under a "Ponte a Vivir " (Get to Living) banner.

The effort from Chevrolet's multicultural AOR, LatinWorks, includes two :30 TV spots, one of which shows how a father, who is angrily toting his mud-spattered kids in the back seat of his truck, softens his perspective on kids and dirt by swerving off road and driving his spotless Silverado through the middle of a mud pit.

Erik Hernandez, creative director at the agency, tells Marketing Daily this is the first work on Silverado for the agency, which took over the reins on Chevy's Hispanic efforts from Accent Marketing a year ago during changes that brought in Goodby Silverstein & Partners as AOR.

"We had been focused on cars [the Cruze, the new Sonic and (crossover) Equinox], so we knew we had to get to Silverado," says Hernandez, who adds that the Sonic advertising will come later.

The new campaign represents a shift in how Chevrolet is talking about trucks. Silverado, which for a long time was carried by "Like A Rock" and a theme about toughness and functionality. The new work shows how its versatility works both for its owners' professional and family lives.

And the general market ads, epitomized by the "Like Father, Like Son" spot, do likewise. That spot shows a little boy playing with a toy crew-cab Silverado on his family room floor, with toy blocks, Barbies, G.I. Joes and even a Laura Croft action figure (his mom). He's playing at being his dad, driving around in the truck helping to lift a toy shuttle craft into launch position, pulling a horse trailer (for a pink-haired Barbie) and driving over a rugged landscape (the family dog's backside). He drops everything when his dad shows up in the same truck, but the real version.

"There was a purposeful shift, and there is a lot of synergy between the Silverado man who is Hispanic and who is part of the 'general market,'" says Ayana Jordan, who directs Chevy's multicultural marketing department. She tells Marketing Daily that the campaign is all about showing two sides of the vehicle. "What we wanted to do in both markets is show the duality of Silverado: it's a partner at work and also in helping children and families; on construction sites and for things like camping and fishing,"

GM spokesperson Tim Wilkinson points out that crew cabs -- trucks with two rows of seating -- are now the largest-selling segment of pickups, and not just in the U.S. "We are seeing, for instance, a lot of interest in the crew-cab version of the [mid-size pickup] Colorado outside the U.S.," he says. The theme is also mirrored in a Mexico-market ad for the Cheyenne (the Mexican Silverado), and even an SUV ad running in Middle East markets.

Says Hernandez: "We have done focus groups and research and found that owners are not just using trucks for hauling things and towing, but as a vehicle that fits different parts of their lifestyles -- both for work and family. So the ads have both elements."

Hernandez says the second of the two Hispanic-market spots shows a little boy wandering around his neighborhood pulling a red wagon full of Legos for doing a child's version of construction work. Then his dad rolls up in a big red Silverado.

"When we did focus groups everyone really felt that those spots related to them in terms of how they use a truck to earn money and support the family -- family and relationships are the things they value," he says. "Ninety-five percent of people said their recreational activities are with their families, whether taking kids to a baseball game or the park, so the ads resonated with them on that level."

Jordan says that the Hispanic ads from LatinWorks will be distributed both on Spanish-language networks and on micro-local buys in English-language media based on ZIP codes in which there are high concentrations of Hispanic consumers.

Wilkinson points out that full-size trucks are now about 11% of total vehicle sales, down from pre-recession but still enough to fill a very large truck.