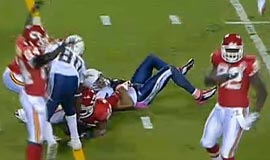 There was a time in the 1990s when TNT carried a slice of NFL games each season, splitting a package with ESPN. Now, with suggestions that the NFL might wish to ink a similar split and add a network to carry a series of Thursday-night games, Time Warner CEO Jeff Bewkes said last week it might be intriguing, but the company wouldn't go down that path unless it's clearly profitable -- not even a loss leader, as much of sports can be.

It might also be difficult for the Turner group to find the money, offering baseball playoffs on TBS and a few years away from carrying the Final Four under a new NCAA deal in partnership with CBS.

"We'd only do something the size of the NFL if we were very confident we could monetize it," Bewkes said on an investor call, according to a Seeking Alpha transcript. "We would not do it, for example, as a loss leader in our projections. So that's basically how we think of things like that. That would be obviously a giant if we made such a move."

Acquiring NFL rights has been "a giant" for ESPN, allowing it to raise affiliate fees, which could of course be the avenue for Turner to make the finances work. Time Warner reported earlier this year that programming expenses increased 37% in the first quarter, primarily due to NCAA rights.

Bewkes said that the company has made "tremendous progress" in using the NCAA tournament as leverage in garnering increases in affiliate payments, which should make the NCAA deal -- $10.8 billion split evenly with CBS -- profitable. More deals with operators are to come that take into account the NCAA, Bewkes said.

The possible NFL Thursday package would include a split of games, since the NFL Network carries some in the back-half of the season.