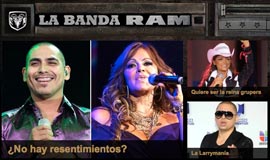 The site has music, blogs, photos, video, news and updates from established and up-and-coming artists of the Norteño, Banda, Duranguense and Grupero regional music genres from Mexico.

The new effort with Yahoo is part of “A Todo, Con Todo,” Chrysler LLC's Hispanic campaign for Ram Truck, which launched in early October. The Yahoo program also extends to Latino music through a year-old brand partnership with the online channel around “Ram Country on Yahoo Music.”

The "A Todo, Con Todo" campaign, which comprises television, radio, print, newspaper and digital media, with creative focused on real people, is focused on 15 top Latino markets in the U.S., although creative is in both English and Spanish.

According to Polk Insights 2011 data through July, the large pickup truck segment is the third-largest purchase segment among Hispanics; compact cars are first and standard mid-sized cars are second.

A Chrysler spokesperson says Ram 1500 is the top-selling Chrysler Group vehicle among Hispanics, and that while the Hispanic consumer market contributes 7.5% to overall auto industry sales, it is 6.3% to Chrysler Group sales.

She points out that even though the largest populations of Mexican Americans are in Texas and California, the campaign is much broader. "This was based off of the success and popularity of [Yahoo's] Ram Country program. It's really an aggregator of content. We are running it in Miami and New York as well," she says. "The brand is looking to increase purchase consideration among Latinos throughout the U.S., not just in one geographic area like California. 'Banda Ram' is an online site, making it available to consumers worldwide. And, the 'A Todo, Con Todo' campaign is running in top markets which including nine in Texas plus Albuquerque, Denver, L.A., Miami, New York and Phoenix," she says.