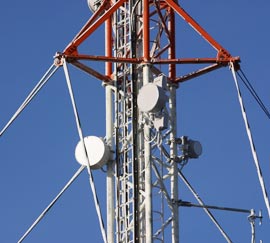 Readers of a certain age will probably remember the weird, late-night tests of local emergency broadcast systems. Well, now the whole country gets to share the mildly jarring experience, thanks to the first nationwide test of the national Emergency Alert System, scheduled to be conducted jointly by the Federal Emergency Management Agency, the Federal Communications Commission, and the National Oceanic and Atmospheric Administration on Wednesday, November 9 at 2 p.m. EST. The EAS is designed to ensure that the U.S. public can receive critical and vital information from the authorities in case of an emergency.

Broadcast TV, cable TV, broadcast radio and satellite radio are all supposed to participate in the test, which is scheduled to last one minute, including the usual announcement that “This is a test,” followed by a data transmission test that will be heard as a series of electronic tones. According to FEMA, the test will be transmitted via television and radio stations throughout the U.S. as well as the territories of Puerto Rico, the U.S. Virgin Islands, and American Samoa.

The national EAS test will resemble the local tests that still occur periodically in most local markets. These local and national emergency notification systems were originally created during the Cold War to warn of an impending nuclear attack, but have been retained for other purposes, including local and regional warnings about dangerous weather events and other natural or manmade disasters. The EAS was not activated during the 9/11 terrorist attacks.

Separately, the government is working on an expanded emergency alert system capable of reaching new channels, including mobile phones. In April of this year, PBS revealed that it is participating in the testing of a next-generation emergency alert system that is designed to deliver multimedia alerts using video, audio, text, and graphics to cell phones, tablets, laptops and netbooks, as well as in-car navigation systems.

The PBS pilot project will test capabilities for a comprehensive new Mobile Emergency Alert System (MEAS), which will eventually be part of the EAS. However there is no mobile component to the EAS test scheduled for Wednesday.