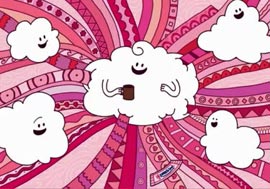 Sweet’N Low is back on television for the first time since 2008, with a quite different creative approach.

The last round of commercials were part of a TV and print campaign featuring talk-show host Regis Philbin and the saccharine sweetener’s longtime mascot, The Pink Panther.

The new TV spots are an extension of a new repositioning campaign created for Sweet’N Low maker Cumberland Packing Corp. by Mother New York. Launched last fall, the campaign seeks to broaden the 54-year-old brand’s consumer base beyond its traditional core demographic of women 45 and older.

Interestingly, the creative solution for contemporizing Sweet’N Low’s image, while adhering to its upbeat brand identity, has a retro feel. To convey sweetness, Mother’s creative uses vibrantly colored images from nature (birds, ladybugs, clouds etc.) rendered in a style inspired by '60s and '70s pop art. Given consumers’ awareness of Sweet’N Low, offered in restaurants as well as sold in retailers throughout the country, product benefits copy/messaging is extremely minimal (“zero-calorie sweetener”): Incorporating an image of the iconic pink packet, with its musical-clef logo, is sufficient.

Family-owned Cumberland Packing reportedly spent up to $12 million in 2010 on the first stage of the campaign, which included digital posters, videos, magazine print ads and outdoor and in-store executions.

The two new, 15-second TV spots use the same cheerful graphic style in animated form. Written by Mother and animated by Nathan Love, they convey that a little Sweet’N Low can help lighten up the day and “make sweet moments sweeter.” For instance, one spot portrays a cloud adding Sweet’N Low to its coffee and then bursting into a (rather psychedelic-looking) rainbow. The other has a similar theme, using sun and moon images.

The ads, launching this month, are set to air on E!, Bravo, Lifetime, TLC, the Food Network, ABC Family and HGTV, and will reach more than 273 million U.S. adults.

Brooklyn, N.Y.-based Cumberland Packing is also selling Sweet’N Low-branded tote bags, bearing images created for the campaign, in the company’s online “general store.” Cumberland’s other brands include Sugar in the Raw, Stevia in the Raw, NatraTaste, Nu-Salt, Butter Buds and Sweet One.

Another current Sweet’N Low initiative: During November, as part of an educational outreach partnership, the brand and Olympic gold medalist Dominique Dawes are hosting free diabetes screenings in New York and Washington, D.C.