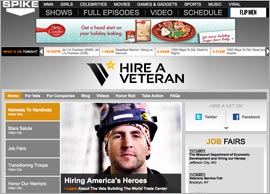 In an extraordinary act of public service, the Spike network has launched a Web destination looking to help veterans with job searches. The “Hire A Veteran” microsite offers a listing of job fairs and resources for veterans and companies looking to hire them.

The site is part of a broader Spike effort that includes PSAs saluting organizations that have hired veterans on-air and online. Veterans themselves appear and “discuss what it means to them to have found work.”

There are also “Hire A Veteran” videos, with stars ranging from Scarlett Johansson to Samuel L. Jackson to NFL players.

Spike will also aid publicity efforts for nonprofits working to help veterans find jobs. Organizations such as GI Jobs and the Wounded Warrior Project are working with Spike.

Spike says it will run spots focused on different companies that have hired veterans every few weeks.

Kevin Kay, Spike’s president, stated: "These young men and women who have bravely served their country are now making the often difficult transition from military service to the general workforce. Hire A Veteran is designed to help in that process."