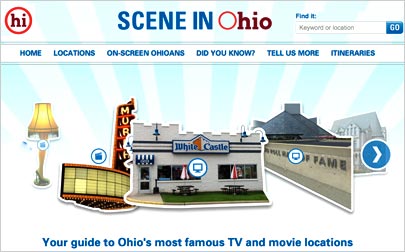 The Ohio Tourism Division is launching a website to showcase Ohio attractions, restaurants and destinations that have been featured in movies and on television.

The goal for the “Scene in Ohio” site is to capitalize on the “travel-motivating factors of mainstream media,” says State Tourism Director Amir Eylon. Travelers are visiting places they have learned about from their favorite television shows and movies, Eylon says. The website makes it easy to find those places along with other nearby sites to encourage a longer getaway, Eylon adds.

The interactive site is kicking off with more than 50 locations, but users are encouraged to add to the site’s content. Listings pull photos and videos from social media networks, show Yelp consumer reviews for applicable locations, and offer social media sharing capabilities.

The website’s main feature is a list of locations searchable by category (movie, television, and food), keyword and zip code; photos and videos from social media channels; Google maps; and Yelp reviews where available. The map feature also shows users the locations of other nearby “Scene in Ohio” sites as well as a brief highlight of stars born in Ohio or with strong Buckeye connections.

Each “On-Screen Ohioan” listing includes an overview of the star's career and Ohio connection, an interesting “factoid” and a link to their profile on the Internet Movie Database (IMDb).

In addition to sample itineraries for “movie buffs” or “foodies,” visitors can build and share their own Ohio itineraries. Ohioans and visitors alike can share additional movie, television and restaurant sites that may be added to the website.

Sites and experiences of all sizes located across the state range from the Ohio State Reformatory in Mansfield ("Shawshank Redemption") to Cincinnati's Fountain Square ("Ides of March") and from Thurman Cafe in Columbus ("Man v. Food") to Wendy Kromer Confections and City Bake Shop in Sandusky ("The Martha Stewart Show").

Research has shown that tourism often increases after places are featured on TV or in movies. The Journal of Travel Research cites two of the most notable increases: a 7% increase in tourism for Savannah, Ga., after "Forrest Gump," and a 300% increase in tourism for the Wallace monument in Scotland the year after "Braveheart" was released. Many restaurants across the U.S. report double-digit sales increases after being featured on Food Network or Travel Channel programs.