Ram Is Official Truck Of The Detroit Red Wings 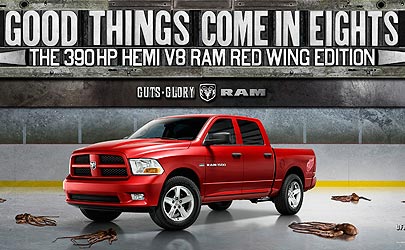 Chrysler Group LLC's Ram Truck brand will have a big presence during this NHL season thanks to a new program that involves the brand, the automaker's Great Lakes Business Center, and Southeast Michigan Ram dealers.

The dealers have had a long-standing program with the Detroit Red Wings team, but the new program for the first time involves big TV media presence, a lot of branding at Joe Louis Arena where the Red Wings play, and a limited-edition Detroit Red Wings Edition Ram 1500 pickup truck that Southeast Michigan dealers will sell.

The 30-second TV spot, "Ram vs. Mule," starts at center ice of the arena with a Ram 1500 parked to the left of the centerline and Johan "The Mule" Franzen standing to the right. After an opening title that says Ram vs. Mule, the camera cuts back and forth between Franzen and the Ram truck as the voiceover describes common qualities they share such: Ram's capability on snow, Mule great on ice, handles hostile road conditions/handles hostile road games, menacing grille/menacing grille. The spot ends with the Ram as "The Official Truck of Hockeytown."

In a mural at the venue painted by Toronto-based hockey artist David Arriggo, Howard is pictured under the Guts Glory headline wearing a Ram branded goalie mask. A second announcing that "Good Things Come in Eights" touts the 390 horsepower V8 Red Wings Ram and references the days when the Red Wings won the Stanley Cup championship in eight games.

Concourse curtains depict the Ram truck grille, and there is also in-game virtual signage and in-ice Ram logos. The arena will also have Ram sponsorship of the "Score-O" intermission promotion and the "Stars of the Game" feature, and fan-engagement promotions throughout the season. A 30-second team spirit video on the big screen exhorts attendees to shout "HEMI. POWERED. HOCKEY" during intermission.

Sam Elliott does voiceover for the national TV campaign for Ram but he's also doing the radio ads for this regional Red Wings promotional effort. It also comprises print ads will run throughout December on the back sports pages of the Detroit Free Press, Detroit News, Oakland Press and Macomb Daily newspapers.