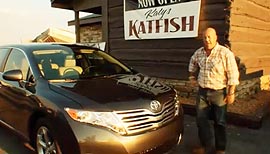 Toyota is launching the third season of its Appetite for Life campaign for the Toyota Venza crossover. The program centers on webisodes featuring celebrity chef Andrew Zimmern, who for the past three virtual seasons has been a kind of gustatory Jack Kerouac, traveling U.S. byways in a Venza, eating, cooking, and hanging out with Americans.

This season, which actually runs until next October, Zimmern is heading south of the Mason-Dixon line. The series -- via Saatchi & Saatchi LA, with some production heavy lifting from MSN -- comprises 20 two- to-five minute episodes, and will have Zimmern offering help to people in the South who were hit by regional disasters from tornadoes to floods. The effort includes support of Feed America.

The series, which launched Nov. 17, has Zimmern engaging in such efforts as opening a pop-up version of Mike & Ed's Barbeque in Tuscaloosa, Ala. to help raise funds to rebuild the real thing, which was destroyed along with pretty much everything else by one of the dozens of twisters in this year's apocalyptic tornado season. He also coordinates a canned food drive for the people in Athens, Ga., to aid victims of recent flooding and tornadoes, helps Katy's Katfish in Rainsville, Ala. (also leveled by a monster twister this year) get customers back through the door, and uses the Venza to do Meals on Wheels deliveries in Atlanta.

Those Alabama episodes showcase the features of the Venza while detailing scenes of horrific destruction that the region is still digging itself out of and has made parts of the South look more like Bangladesh than the U.S.

Margaret Keene, executive creative director and Chris Pierantozzi, creative director at Torrance, Calif.-based Saatchi & Saatchi LA say boomers --the core Venza consumers -- are particularly involved in charitable activities, and are thus likely to connect with the series on that level as well as with the epicurean theme.

The automaker has been forthright about pitching Venza to Boomers (albeit fun-seeking Boomers, which is how all Boomers see themselves) bucking a rather traditional approach of ostensibly marketing anything with wheels to young people, and it connects with older consumers' inner hipsters. This past summer Saatchi & Saatchi launched a Venza campaign in which boomer parents -- in a role switch -- were the ones having all the fun, while the kids who have moved out, or moved back, are actually the worried, uptight, generally stodgy, and bored ones.

Pierantozzi says that while Saatchi & Saatchi developed the idea, the agency partnered with MSN for production of the project because of MSN's reach and acumen around content creation. "They have lots of experience and the production companies they use do amazing work. We knew the production value would be great," he says.

Keene adds that the MSN relationship also reflects, more broadly, how the migration of digital media from the periphery to the center of creative campaigns has changed the essence of asset creation and delivery. "It's really about partnerships now, not just the media buy. It's about quality. [The series] looks like a beautiful, high end reality series, and has the look and feel of the [Toyota] brand; it's not the old webisodes all of us in the industry used to do. Production partners are really, really important."

Pierantozzi says the agency, MSN and Zimmern used their respective social networks to make each of the events -- the restaurant pop-up, the re-Grand Opening of Katy's Katfish, for example -- a success. "We used social networks to reach out to people in the community, we put up fliers, we got the word out," he says.

The Venza is featured in the series, as video footage captures the car from different angles and focuses on Zimmern using the vehicle's different features and amenities. And the microsite in which the episodes are embedded are also Venza centric. "We set up the website so that as you watch there's a separate module to one side that showcases the car; and when [Zimmern] uses a specific feature, the module highlights that feature as well," says Perantozzi.

Keene says the site is a consumer experience designed to appeal to boomers. "The content is relevant; we designed it so that they will spend a while onsite," she says.

The Venza crossover, first introduced in 2008, resides both in terms of price and size between the RAV4 compact SUV and the mid-sized Highlander crossover. Calendar year-to-date Venza U.S. sales are down about 17% to 33,157 through October.