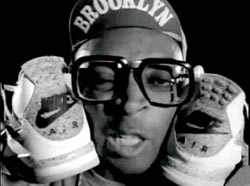 With young men’s passion for classic kicks still going strong, it makes sense that the ads used to sell them are getting more love, too. Complex.com just came out with a ranking of “The 50 Best Sneaker Ad Campaigns,” which will give Gen Y dandies the chance to meet old-school ad genius, like Nike’s “Bo Knows” and Charles Barkley’s “I am not a role model.”

“Context matters a lot, and there is so much retro product on the shelves these days,” Russ Bengtson, Complex’ sneaker editor, explains to Marketing Daily.  “If you see the ads, you understand the whole concept.”

To select the top 50 spots (which may start a few fistfights among ad mavens of a certain age), Complex tapped Nick Santora, whose Classic Kicks store in New York was something of an epicenter for the vintage shoe world.

While it’s hard to quantify just how important the retro trend is to the sneaker business, it’s way bigger than LeBron’s feet. “Most of the sales of actual vintage shoes are private, between collectors,” says Matt Powell, an analyst and sneakerologist with Princeton Retail Analysis. “I’d estimate those sales at less than $10 million in sales per year.”

But those purchases, among style setters and fashion influencers, many of whom have 100 pairs or more of vintage sneaks, have an enormous impact on the new shoe business, he says: “Basketball shoe sales were $2.8 billion last year, and of that, 28% were retro styles.”

The first retro styles were introduced in mid-90s, says Bengtson. But by the late ‘90s, retro style shoes took off, and collectors are still flocking to places like Classic Kicks, Flightclub, and Sole Collector.

But why mostly basketball? And why retro? “All athletes rely on their shoes, but they are much more a tool in basketball,” Bengtson says. “Shaving that milliliter off the sole is important, and they are looking for any advantage they can get. People like Michael Jordan and Kobe Bryant have a great deal of credibility about design.”

And retro appeals to this demographic, he says, “because it’s been 15 years or so and they are nostalgic about what they wore in high school. And now they have the money to track the shoes down and wear them again.”