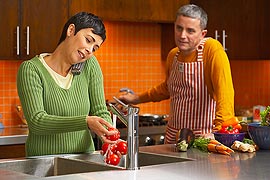 Although economizing continues to be a core driver behind increased amounts of home cooking, it’s definitely not the only reason.

In fact, half (51%) of home cooks cite the desire for a healthier diet as an important motivation, saying that home-cooked food is generally healthier than either restaurant food or prepared foods sold in grocery stores, according to a new Mintel report on cooking enthusiasts.

Older cooks are somewhat more likely to cite health as a reason for their interest in cooking. Also, not surprisingly, they tend to be more skilled than younger generations: 15% of those 55 and older say that they have “advanced” cooking skill, versus 6% of Millennials.

The downside: Older cooks can get into a rut. However, this creates an opportunity for food marketers to provide seniors “with options that adhere to specific health requirements, as well as add an element of fun and adventure to meal prep,” notes Mintel senior analyst Fiona O’Donnell.

On the other hand, one-quarter of Millennials claim to “love” cooking. Furthermore, consumers in their 20s and 30s are more inclined to experiment and to agree that cooking gourmet meals makes them feel sophisticated and smart -- suggesting that learning to cook and cooking for friends are viewed as a way to establish credibility among their peers.

Overall, 56% of those who cook occasionally say that cooking allows them to experiment and try new things, and 27% specifically say that it helps them explore foods eaten in other cultures.

Nearly half (48%) say that cooking is a way to express affection to friends and family, and 41% report that they enjoy teaching their children how to cook.

Forty-three percent say they enjoy the process of cooking as much as eating, and 40% say that it helps them relax.