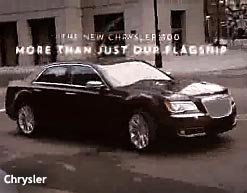 Chrysler is once again importing Detroit into an NFL ad buy. On Thanksgiving Day, during which the Motor City will host the NFL game between its own Lions and the Green Bay Packers, Chrysler will run a 60-second national TV spot.

The ad, like the "Born of Fire" spot that ran during the 2011 Super Bowl, will tap into the Detroit zeitgeist. But instead of using rapper Eminem, the company will use a different poet. The ad featuring the Chrysler 300 sedan will feature a poem by Michigan Poet Laureate Edgar A. Guest, who grew up in Detroit over 100 years ago and was a copy boy at the Detroit Free Press in the 1890s.

The campaign, via Portland, Ore-based Wieden+Kennedy, uses the words to Guest’s poem “See It Through,” penned in 1917. The campaign, which has digital and print elements as well, also features Detroit Lions defensive tackle Ndamukong Suh.

As did the "Born of Fire" Super Bowl spot featuring the Chrysler 200, the new ad offers unvarnished shots of metropolitan Detroit urban and rural neighborhoods and the folks who inhabit them. The ad, which keeps the "Imported from Detroit" mantra, is set to Muddy Waters singing “Mannish Boy” with a voiceover reciting Guest’s “See It Through” as a Chrysler 300 drives through various neighborhoods, past the people and faces. Suh is shown standing in front of his Chrysler 300. It ends with “The New Chrysler 300. More Than Just Our Flagship” and an “Imported from Detroit” title card.tv.

Although the long-form ad's TV debut is on Fox during the Thanksgiving Day game, the "See It Through" video will run on the USAToday.com home page all week, per the company. On Wednesday, Suh and his 300 sedan will be featured on a USA Today newspaper cover wrap. Then on the Friday, USA Today will run a two-page spread featuring the “See It Through” poem, the 2012 Chrysler 300, and images of the Detroit neighborhoods and people who are in the TV spot.

“The ‘Imported from Detroit’ message that hard work pays off has resonated nationwide,” said Saad Chehab, president and CEO of the Chrysler brand, in a statement. He said the original "Born of Fire" spot resonated because it "captures the spirit of the country in addition to the comeback of the Chrysler brand and Chrysler Group."

The company indeed seems to be benefitting from its adoption by Fiat S.p.A. Last month, Chrysler Group reported U.S. sales of 114,512, a 27% increase versus last year, and the best October since 2007.

Also, the Chrysler brand, which had a 28% sales increase, saw stronger sales gains than the other three Chrysler Group brands (Jeep, Ram, and Dodge). That is a stark shift in the Chrysler brand's fortunes in previous years, when it had little but the aging 300 sedan, and the Town and Country minivan, which competes in an evaporating segment. Chrysler has had strong sales uptake for the 200 sedan, which saw a 405% gain last month.