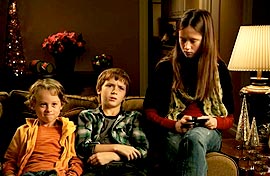 Coldwell Banker is focusing on the inevitably crowded family get-togethers to encourage consumers to think about moving.

A TV spot breaking Nov. 22 features a family devising their holiday game plan to accommodate guests. Bringing in equal parts of empathy and humor, the parents accidentally leave themselves out of the equation, and end up having to sleep in the garage.

Coldwell Banker CMO Mike Fischer says the campaign is targeted toward “everyone and anyone who needs more space. We took a lighthearted approach that makes a very important point that the home plays a critical role in our lifestyle,” Fischer tells Marketing Daily. “The holidays are a perfect time to remind consumers of the role their home plays in their everyday lives.”

Despite being crowded together, a recent survey shows that the majority of Americans wouldn’t have it any other way. Approximately 4 in 10 respondents (39%) say their holiday get-togethers include 15 or more family members and friends, and more than half (54%) say they stay overnight with their families so they can all be in one household during the holidays.

The first creative spot from the new advertising agency of record for Coldwell Banker, El Sequndo, Calif.-based Siltanen & Partners, underscores the emotional side of owning a home in a fun way, highlighting the role of family and the homes as central holiday headquarters. The commercial airs during NBC’s annual Rockefeller Plaza tree lighting ceremony.

Coldwell Banker also partnered with NBC’s LXTV Open House to design a holiday-themed segment for this weekly national show. In addition, a man-on-the-street video shows the intertwinement of home and family.