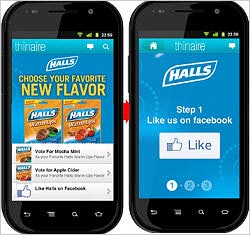 A product-launch campaign for the Halls cough drops brand is the first out-of-home effort to employ near field communications (NFC), according to Kraft Foods.

The campaign, from Halls’s shopper-media planning and buying agency, Horizon Media, is using both NFC technology from Thinaire and QR codes, on posters located at 33 Chicago bus shelters.

The concept: The posters promote Halls’s new Warm-Ups product – which combines the brand’s mentholated cooling properties with a warming sensation – and encourage consumers to use their cell phones, via the NFC function or QR code on the posters, to connect with and like the brand’s Facebook page, then vote for one of the two Warm-Up flavors: Apple Cider or Mocha Mint.

The newly launched campaign is designed to build awareness among on-the-go consumers about the product’s dual properties – and in particular the hot beverage-like warming sensation that consumers crave for soothing and warming their throats during cold-and-cough season, according to the research behind Warm-Ups – by engaging them in the Facebook voting, explains Halls brand manager Mindee Elam.

The chosen bus terminals are all close to convenient points of purchase (including Walgreens stores), and at two of the terminals, commuters can actually self-dispense Warm-Up samples from machines.

For Halls, allowing consumers who have NFC-enabled smartphones to use Thinaire’s “Tap and Snap” NFC platform to connect with and vote on the brand’s Facebook page is a cutting-edge, easier-entry engagement method that also brings with it expanded, real-time data-collection capabilities beyond those possible via QR codes. The Thinaire-generated data, accessible at any time via a dashboard, show user activities such as sharing Facebook votes with friends, and even purchases of the product, where consumers are using NFC to make mobile payments.

At the same time, having the QR-code engagement capability ensures that consumers without NFC-enabled mobile phones can participate.

For the uninitiated, NFC is a short-range wireless technology that allows for connections, data exchange and transactions that are both simpler and more diverse than those possible with QR codes.

The NFC chips embedded in a growing number of smartphones can send encrypted data a short distance (usually a few centimeters). When the user simply waves the phone near or (at least in the case of Thinaire) taps any NFC-tagged poster, sticker, product tag or other medium, the phone’s chip reads the embedded information, enabling a connection to a Web site, video or in theory virtually any type of content/service.

In other words, there’s no need to perform manual actions like snapping a picture, or downloading one of the device/platform-compatible barcode scanners needed to read QR codes. The ability to make effortless mobile payments via NFC – waving a phone at a tagged product or checkout scanner to pay instantaneously from your electronic wallet – is generally considered NFC’s “killer” app. And, as noted, for marketers, expanded, real-time data-collection capabilities are another major advantage.

However, the speed of full realization of NFC’s potential for revolutionizing interaction, marketing and transactions depends on many factors, including the pace of release of NFC-enabled Android and iOS smartphones (iPhone 5 did not include NFC enablement).

And while Google’s decision to phase out QR code support for Google Places, in favor of supporting NFC, made headlines early in 2011, marketing (and even tech) pundits point out that, at present, each of these platforms has its plusses and minuses.

(Among many recommended reading pieces: Tim Supples of Ettend on Engage365.org, and Vest Advertising’s Susan Gosselin on InsiderLouisville.com.)