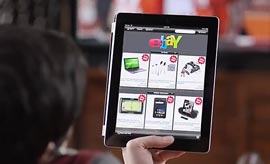 For those who don’t want to head out to the stores at 4 a.m., eBay has the solution, and it’s called “Couch Commerce.”

Buoyed by reams of data (including some from its PayPal subsidiary), the online marketplace is expecting a shift in the way people will do their holiday shopping over the Thanksgiving weekend. As soon as the meal is done, consumers will head to their couches to shop with their smartphones and tablets as they digest their big meals.

“We know it’s going to be a huge holiday for mobile,” company representative Amanda Coffee tells Marketing Daily. EBay is predicting it will see $5 billion in mobile commerce in 2011, while PayPal will see more than $3.5 billion in mobile volume. “‘Couch Commerce’ is all about not rushing to the mall.”

To encourage the trend, eBay has revamped its mobile app with a new feature called “Watch with eBay.” In essence, the new feature, which appears as a tab on eBay’s app (which has been downloaded 58 million times) syncs with the shows people are watching on television to offer products that have the same appeal as the television programming they’re watching (Justin Bieber on Rachael Ray, for instance).

To enable the app, consumers will have to enter their zip code, cable provider and channel they’re watching and confirm that the scheduled program is on. The app will then use show and event-specific keyword searches to provide relevant merchandise for the consumer watching the programming.  (The company has created an amusing online video, “Feldman Discovers ‘Watch with eBay’,” explaining the whole process.

“EBay is uniquely positioned for television commerce,” Coffee says. “We’re basically the only place where, if you see something on televisions, we’re going to have it.”

To promote the new feature, eBay is setting up “Happy Holiday Hotspots” in New York City and San Francisco. The hot spots will feature trucks that deliver free food, free WiFi and free app downloads so consumers can experience eBay’s marketplace first-hand. “We’re trying to get people used to the idea that they don’t have to be in the mall to shop,” Coffee says of the two events.