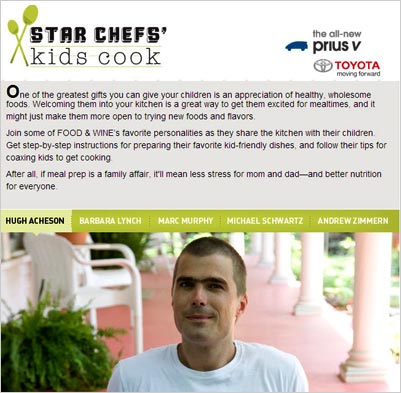 The effort serves up tips and recipes from five chefs: Chefs Hugh Acheson, Barbara Lynch, Marc Murphy, Andrew Zimmern (who is also doing the Toyota Venza culinary and helping-hand road show "Appetite For Life"), and Michael Schwartz are featured in the multi-media program. The central motif is a kind of "you can too" theme, where the top chefs make cooking a family affair by including their own kids in the preparation process, and then offering tips on how viewers and readers can do likewise.

The content will live as a digital rich-media site and a custom print section that includes things like instructions on how to do kid-friendly dishes, make meal preparation something both kids and adults can do, plus Q&A's with each chef, and the chefs' own memories about cooking with their kids.

Dionne Colvin, Toyota's national media manager, said the tie-in made sense as the Prius v is positioned for versatility (which is, actually, what the "v" stands for.) “The Prius v was designed to meet the needs of young families with active lifestyles," she said in a company statement.

The January issue of Food & Wine, which hits news stands mid-December, will carry the “Star Chefs’ Kids Cook” program announcement; the program also gets support in the magazine's e-newsletter “F&W Daily” and weekly e-newsletter “The Dish.” There will also be display ads on foodandwine.com and through a sponsored Facebook chat on the Food & Wine Facebook page.

Nick Van Sicklen, digital ad director at Food & Wine, tells Marketing Daily that, while the publisher has an ongoing relationship with Toyota, this is a first spotlighting Prius. "We created the framework but worked with Saatchi & Saatchi to refine the overall program," he says. "It was kind of born around conversations [with the agency] about spending more time with family." He adds that Saatchi brought it to Toyota and they liked it as it aligned with the Prius v as a vehicle for more possibilities for active families, and epicurean lifestyles.

The program also aligns with Toyota's focus on 360-degree integration, and thus brought something new to the table for AmEx Custom Publishing: a campaign that leads with digital. "That is new for us," says Van Sicklen. "We have print and social attached -- there are in-book advertorials and elements on social media driving the promotion."

He says Toyota and Saatchi & Saatchi liked the idea of premium content, plus quality audience, and a custom solution. "The digital is the meat of the thing where all the content lives, though Saatchi wanted other extensions -- a 360 approach with touchpoints in social and print," he says. "So we are promoting this via Facebook and Twitter: Prius v will sponsor [the social program] 'The Kitchen Insiders,' where we bring in chefs, and fans can ask questions about cooking and recipes."

Toyota is turning the Prius line into a bona fide sub-brand. There will also be a Prius c (for "compact") joining the Prius v and the original version of the car, as well as a Prius PHV (“Plug-in Hybrid Vehicle”). The Torrance, Calif. automaker also introduced a sporty limited-edition version of Prius, called the Prius Plus Performance Package, in July.