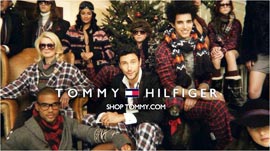 The effort, via N.Y.-based Laird+Partners, continues “The Hilfigers” extended-family theme launched this time last year by the division of PVH Corp. "The Hilfigers" are a diverse "family" of Americans living in a mansion, with trendy threads and a Millennial demographic, save for the fashionable patriarchs, perhaps meant as avatars for the real Tommy Hilfiger. Besides television, in-cinema and online, the effort includes a global print and outdoor campaign.

The ad puts viewers at the fictive Hilfigers' home, dubbed "Casá Nobiliùs Maisõn-us" where one hears the sounds of a disco party. The door opens and the viewer is ushered in and surrounded by the Hilfiger family -- models all -- decked out in new Tommy Hilfiger tartan apparel, though in various states of undress. They dance about the house until the family basset hound, Morgan IV, pulls the plug on the music.

Besides touting the family, the campaign showcases the brand's “Preppy Holidays” collection, which is available at retail worldwide and online at www.tommy.com/preppyholidays.

"We are bringing consumers a seamless, unique take on the season,” said Avery Baker, CMO of Tommy Hilfiger. She tells Marketing Daily that the firm spent $175 million in advertising, marketing and communications across all channels in fiscal year 2011 and adds that the TV campaign will break in the U.S. during Macy’s Thanksgiving Day parade.

The ad will also run on Taxi TV in New York City, starting this week, and the TV spot will be the first that Tommy Hilfiger will run on national television in Canada, per Baker.

The company is also running the spot in Italy, Spain, France and German starting in early December, and will also air the spot in a number of South American markets. Baker says that the adds will be identical and in English, regardless of the market. "English is the language of the brand, and it adds to the American flavor,” she says. In the U.S. spots, Macy’s will be tagged.

The company is also running the spot on its YouTube channel. The company's web strategy for the campaign involves putting the “Preppy Holidays” collection in local- market digital advertising, social media campaigns and on tommy.com and Facebook.

National print and outdoor placements in key cities around the world will round out the integrated campaign, running throughout the holiday season.