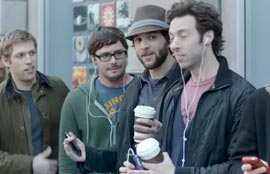 Samsung Mobile mocks the hipsters and “artists” who spend their hours and days lining up for the latest iPhone in a new ad campaign, asserting they could already have the “Next Big Thing,” if they’d just broaden their horizons.

A new television commercial airing over the Thanksgiving holiday shows people lined up outside technology boutiques (the words “Apple” and “iPhone” are never mentioned, but they are clearly understood) around the country. In the line, they discuss the rumors and expectations of the latest device they’re waiting for. “Nine hours down and we’re almost in the door,” says one. “This is going be an event. We’re going to remember this for the rest of our lives,” says another.

As the hipsters peruse the rumor mill (“Blogs are saying the battery looks sketchy”), they spy someone using a Samsung Galaxy S II. Amazed by its capabilities, thinness and screen size, they display smartphone envy (one asks “Is this what adultery feels like?”)  “The next big thing is already here,” reads onscreen text. After realizing the phone they’re waiting for isn’t as advanced as the Galaxy S II, they rationalize waiting by saying the phone they’re waiting for has a cool “retro” vibe.

“Since the Galaxy S II first launched back in September, it has become the top-rated smartphone among the most influential reviewers and tech Web sites,” Brian Wallace, Samsung Mobile’s vice president of strategic marketing, tells Marketing Daily. “We’re launching the ad campaign ... to help educate people that the Galaxy S II is the best smartphone on the mobile market, period.”

With increased overall competition in the smartphone market (not just from Apple) and the high-pressure holiday season, Samsung Mobile is focusing more on the user experience rather than the technical aspects of the Galaxy S II, Wallace says.

“We’ve already got millions of people using [it] as their smartphone of choice and comparing it against their friends’ devices,” he says. “We want to use the enthusiasm and word-of-mouth buzz … to our advantage to educate consumers in a fun and new way.”

The ad began running on Samsung Mobile’s Facebook page on Wednesday. It moves to television on Thursday, running during Thanksgiving Day’s NFL broadcasts, as well as throughout sports programming over the weekend. Shorter versions of the commercial will run on broadcast and cable networks throughout the holiday season.