Progressive Insurance's Messenger Is The Message 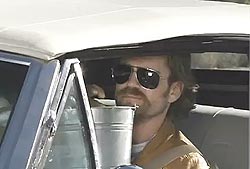 Progressive Insurance is going outside its fictive Superstore campaign and outside advertising, as well, in a new campaign with a reality motif centering on -- and giving free reign to -- a Dennis Hopper-like road warrior. The campaign features a rugged altruist who travels around the country in his vintage Pontiac GTO, scattering good deeds like an actuarial Johnny Appleseed.

The character, called "the Messenger," appeared in scripted ads last year -- but in the new effort, he meets and gives a hand to real people. No sets. No scripts. Broadly speaking, the character is merely intended to represent a Progressive customer who saved when he switched to Progressive and is now traveling the country to “Save it Forward.”

Jeff Charney, CMO of the Mayfield Village, Ohio-based company, tells Marketing Daily that the raffish charisma of John Jenkinson -- the L.A.-based actor whom Progressive tapped to create the Messenger character in 2010 for a traditional ad campaign -- had as much to do with the idea for the new unscripted effort as did Progressive itself. "We loved his energy. He's a motorcyclist and Progressive customer; he's very passionate about Progressive. When we did six spots with him last year I noticed that when the camera was off, he really lit up. People just gravitate to him. So part of the mystique of the Messenger is really who he is."

While the new campaign starts off with more traditional, somewhat-scripted ads in which Jenkinson does things like roll up to a toll booth and dump a bucket of quarters into the funnel to cover the next hundred cars, the crux of the campaign will be digital and minimalist, centering on raw footage of the Messenger interacting with the people he meets in different walks of life who need help with specific "pain points."

He will do things like fill up someone’s gas tank, pick up the tab for their morning coffee, cover their baggage charges at the airport, buy snacks from a hotel mini-bar, take care of their ATM fees and actually take over a toll booth and take care of passing drivers.

Progressive's AOR, Boston-based Arnold Worldwide, which collaborated on the effort with the company's in-house production team, will transmute some of that footage into national TV ads, but Charney says Jenkinson and his Messenger character are "built for emerging media. He's very active in social. As he's doing these 'save it forward' actions across the country, they go viral. When he goes into a place like Phoenix or Rocky River, his social networks just light up."

Charney says the company's Superstore ads and the Messenger campaign complement each other, since they are both designed to further the company's transparency ethos. "The Superstore is about making the process simpler, making something intangible tangible, and that's the case with the Messenger, as well." But he says the point isn't to make the Messenger into a brand spokesperson. "In a sense, he's an anti-spokesman. We don't want him to be a brand icon -- we want it to emerge from a campaign to a movement."

The Messenger campaign hit the road with a regional ad buy in select markets, with a national ad buy later in the year and into 2012. Meanwhile, Progressive will introduce new "Superstore" creative featuring the spokesperson Flo.

The bottom line, per Charney, is that the Messenger and his ecumenical message of helping out a little bit works best when the company doesn't get too involved or "when we let him interact with real people in real situations, when they’re facing small everyday ‘pain points’.” While a video crew will trail him, shooting the spots and online videos, it comprises a couple of people rather than a team.

A final note, since this is Thanksgiving -- the Messenger also demonstrates in one of the videos how you can cook a turkey by wrapping it in tinfoil, putting it in the engine compartment and driving around 300 miles, which is worth thinking about if you're hitting the road. For those taking I-95, the car doesn't actually have to be moving for the bird to cook.