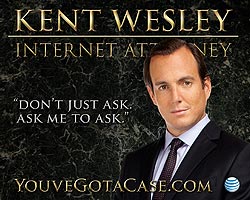 ’Tis the season for cases for gifts. And although many will rely on their own negotiating (or nagging) skills to get the gift they want this holiday season, AT&T Wireless is offering up its own (fictional) lawyer to help them make the case for a new smartphone.

“When we initially thought of this, we wanted to create positive brand perception around [AT&T],” Jennifer Fisher, director of digital and youth marketing for AT&T, tells Marketing Daily. “Youths love humor. That brings awareness and raises brand perception.”

Via a new Facebook effort, “You’ve Got a Case,” AT&T has enlisted “powerful Internet attorney” Kent Wesley (played by actor Will Arnett) to help consumers craft a personalized case for one of several hot new smartphones available during the holiday season. The videos use Arnett’s signature bumbling, arrogant style to send the message. In an intro video, Wesley claims “the only thing I can’t win is a losing contest. And I generally come in second or third in those. But usually I don’t even enter them, because they’re filled with losers, who can only lose and never win. Although I would win, if I was in it with them. But we’ll never know, because I won’t enter it. Unless there’s a contest to enter it. I’d win that.”

Meanwhile, the Facebook app takes information from a user’s public profile (such as their profile photo, school information and some of their interests) to create a personalized argument to a specified giver (such as “Mom,” “Dad,” “Sweetheart” or “Friend”) for a smartphone. The proceedings move to a courtroom where Wesley makes the argument for the phone with charts (featuring a user’s photo), expert witnesses to testify on a user’s behalf (claiming they went to school with them) and even tattooed initials to close the case.

The video, once completed, can be posted both in the user’s newsfeed as well as on the giver’s wall. Friends of both are encouraged to “like” the video to further strengthen the case for the gift. (The video can also be emailed to non-Facebook users.)

“The more personalized it is, the more effective it is,” Fisher says. “[The humor] makes it increasingly viral and more personal.”

The campaign targets consumers ages 13-34 -- referred to by Fisher as AT&T’s “core consumer.” The program is being advertised through pre-roll videos on humor sites appealing to those consumers such as CollegeHumor.com, Fisher says. “In the spirit of fishing, we wanted to go where the fish are, given this target,” Fisher says. “We wanted to connect with them in a funny way and show them the value of a new smartphone.”