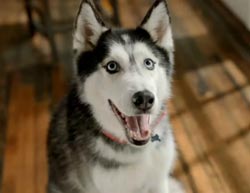 Mishka, the talking Husky who has garnered millions of YouTube views, is the star of a new TV spot for Purina Veterinary Diets FortiFlora Nutritional Supplement.

A recent study by Purina revealed that almost 40% of pets had some kind of GI incident over the past year, says Sue Haddrill, director of veterinary marketing, Purina. "GI problems stress both pets and their owners, especially during the holiday season," Haddrill tells Marketing Daily. "We think the ad is a fun and memorable way for owners to learn about how they can help their pets get back to being themselves."

Purina's target audience is pet owners who want to do the best they can for their pets because pets bring so much happiness to their lives, she adds. The spot debuted on Thanksgiving during The National Dog Show Presented by Purina on NBC. It is also posted on Purina's and Mishka's YouTube channels. Mishka's owner is promoting it via Mishka's social networks. Plans are in the works for other national TV airings.

Mishka, whose You Tube videos have garnered more than 200 million views, stars in the ad. During the course of the 30-second spot, Mishka is able to express her full range of dramatic talents, first by channeling the plight of dogs experiencing digestive upset, then by voicing happiness and relief after feeling better with FortiFlora.

FortiFlora Nutritional Supplement contains a special strain of probiotics proven to promote intestinal health and balance. It is designed for dogs and cats with GI upset, and is the number one probiotic recommended by veterinarians. The supplement, which is sprinkled on the dog or cat’s food, is available exclusively by prescription from veterinarians.

“Mishka has made a name for herself as a ‘talking’ dog, and her most well-known phrase is ‘I love you,’” says her owner, Matt Gardea, adding that Mishka offers this signature line at the end of the ad in appreciation for feeling better.