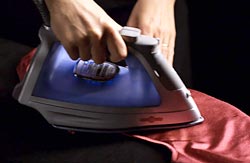 The effort, via Darling Agency, New York, is the Richmond, Va. company's first new advertising in two years. It is set to break pre-Christmas.

The ads are visually focused on the products, but hint at their place in the daily life of families by putting them in situ. The ad for the slow cooker puts the device in the back of a vehicle, surrounded by rackets, soccer balls and gear for a picnic. Voiceover says they “prepare, take, and serve.”

The spot for the Durathon iron shows the device being used through the years, a transition suggested by the hands changing from mother to daughter, by the clothes being ironed (from baby togs to graduation gown) and "Rock-a-bye-baby" played on music box, electric guitar and graduation orchestra. The ad touts the iron's 10-year guarantee.

The NACCO (North American Coal Corp.) Industries subsidiary, which competes with brands like Black & Decker, Salton, Cuisinart, DeLonghi, and Sunbeam, says the ads are intended to reach a wide female demographic. The TV spots, which are being fielded in 30-second and 15-second formats, will run on cable channels like the Food Network, HGTV, and Travel Channel. The effort also has digital and social media elements. Print ads are running in food and shelter magazines like Real Simple, Cooking Light, and Walmart's All You. Media buying is by Lewis Media Partners, Richmond, Va.