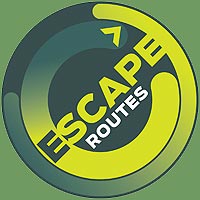 When it comes to getting the word out about new cars and trucks, Ford Motor adheres to a social media-centric strategy. Thus, just as the Dearborn, Mich. automaker did with "Fiesta Movement," and "Focus Rally: America" --- not to mention the social media launch of the 2011 Explorer -- it will put its best Facebook forward for the pre-launch buzz-building effort for the 2012 Escape.

The program, called "Escape Routes" will also borrow the road-trip theme from the "Focus Rally" program. This time, six two-person teams will compete in various U.S. cities, on the road, and in virtual space as well since in addition to driving, the teams have to solve physical and mental challenges in real time while their social circle of fans and followers play along virtually.

Each week next spring, the teams will arrive in a new city to compete in a series of spontaneous adventures and interactive social gaming challenges using their Escapes.

Crystal Worthem, manager of Ford branded content and alliances, tells Marketing Daily that Ford is still finalizing the host cities, and the specific challenges have not been nailed down either, since they depend on locale.

But she says the inspiration for the program definitely comes direct from "Focus Rally: America." "One of the things we did and found to be wildly successful was in-car live-streaming, in terms of the number of people consuming it and interacting," she says. "They would Tweet contestants and the contestants would give a shout out to people via the live stream. That was just a small part of the Focus Rally, but those learnings allow us to take it to the next level."

She says that while the specific challenges will address cultural vicissitudes of each host city, they will all be designed to exploit the features of the new Escape, which does things like automatically open the tailgate when it senses movement of one's foot beneath the rear bumper (so you don't have to use your hands), and has the upgraded Sync-based MyFord Touch.

At each stop the teams have to use their own virtual social circles to solve problems and challenges. Unlike "Focus Rally," the teams will live together.

Ford will distribute content via weekly episodes about each adventure on mobile and traditional digital platforms, plus short-form vignettes driving consumers to the online/mobile platform. Ford says each team will have its own personal content creator selected from blogging networks. This person will be embedded with Escape Routes, capture content, and distribute it to his or her social network and earned and owned platforms.

Worthem says the live streaming component of the program will not be limited to in-vehicle road-tripping, as was the case with Focus Rally. It will be happening in the homes or hotels the teams inhabit in each city and outside the vehicle during the execution of the various challenges. “And this time, consumers will have more opportunities to get involved," she says.

For example, people following the teams will be able to interact and change the course of the challenges (none of this has been worked out entirely, per Worthem) during the live streaming components, on the Web site, as well as via social tools outside of live streaming.

"We are working through what they are, but they are going to be based around the city experiences, so once we finalize the city list we will get into how we might deliver those challenges."

Ford is casting for five teams as of now (the sixth team will be picked via consumer online voting) at Escaperoutes.com or at one of 10 open casting calls in Los Angeles, Chicago, New York, Dallas, Boston, Seattle, Miami, San Francisco and Atlanta, with specific casting dates and info on the casting process on the Web site.

"We are looking for big personalities, people who are socially tied, diversity in terms of types of teams, age groups and backgrounds," says Worthem, adding that the company is looking to make the teams reflect the socially connected professionals to whom the company is pitching the new Escape.

Worthem says the campaign will run right up to the spring launch campaign for the 2012 Escape. "So we are looking at March to May timing. Early in the new year we will announce the cast and host of the show as well as cities, and then we will move into filming."

The effort was developed with Ford's agency consortium, Team Detroit, and the reality-TV production team of Bertram van Munster and Elise Doganieri, who created CBS' "The Amazing Race," and also helmed "Focus Rally: America." "What's really important is compelling content, and they have the experience. We are counting on them to help us create the right content that educates and entertains."