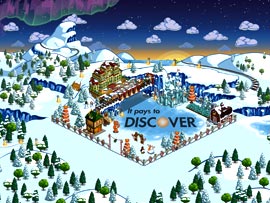 For Discover, the holidays are all fun and games.

The credit card and financial services company has partnered with social game developer Zynga to launch the first-ever brand-sponsored extension of FarmVille. The new extension, called Winter Wonderland, allows players to build a customized holiday farm. (Zynga has previously released to expansions, English Countryside and Lighthouse Cove, though neither were brand sponsored.)

“We know our cardholders are very interested in social gaming,” Jennifer Murillo, vice president of brand communications at Discover, tells Marketing Daily. “This whole idea was about building on that.”

The Winter Wonderland expansion involves helping an orange Yeti use a Discover card for his holiday shopping. Other elements of the game involve working through tasks to earn coins redeemable for in-game purchases and earning a castle one can use to decorate his or her farm.

“We want to enliven the game play and be a part of the game,” Murillo says. “We want to make sure it’s something that will delight the user.”

Current FarmVille players will be getting an early peek at the Winter Wonderland extension by visiting Discover’s farm within the game, before the game becomes available to the general public next week. To entice new players, Discover will be handing out free virtual gifts for playing the game, which will also include the ability to earn three Discover-branded farm items for completing different tasks within the game.

Discover will also reward existing card holders to double their Cashback bonus rewards on virtual Zynga game currency (e.g., turning $25 in rewards into a $50 Zynga Game Card) during the two-week sponsorship. The company is also looking to sign up new cardholders through a special Facebook link, awarding these new enrollees with a $100 Zynga currency card after their first purchase.

Discover’s sponsorship of the game extension will last until Dec. 14. Continued sponsorship beyond that is yet to be determined, Murillo says. “We’re working through how this is going to evolve,” she says. “I’m sure we’re going to be learning a lot, and then we’ll chart the course as we go.”