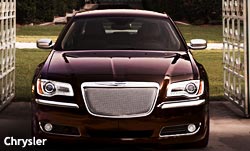 And, also not a shocking surprise, sales volume seems to have been driven by  consumer demand for fuel efficiency as Americans look for ways to save moolah. But that doesn't mean consumers only bought matchbook cars. Automakers saw strong sales of SUVs and trucks that offered better fuel efficiency.

GM's U.S. sales rose 7% last month, with retail deliveries up 15%. "We are seeing a broad spectrum of customers return to the market," said Don Johnson, vice president, U.S. Sales Operations, in a statement. "Truck sales showed a very solid increase, as we expected, but the momentum building behind our most fuel-efficient vehicles was even stronger."

The automaker said combined sales of GM small and compact cars were up 54% compared with a year ago. GM's total passenger car sales increased 1%, crossover sales decreased 9% and sales of trucks, which include full-size pickups, vans and SUVs, increased 25%. The company's Silverado pickup saw a 34% increase, and the sibling GMC Sierra was up 22%.

Ford posted a 20% gain last month, which the Dearborn, Mich. automaker said was its largest year-over-year increase in nine months. Total sales (including fleet deliveries) were 166,865, up 13%.

Ford said brand retail sales up across the board with double-digit gains for Fiesta, Fusion, Escape, Explorer, F-Series, Econoline and Ranger.

"The industry sales rate has exceeded 13 million in each of the last three months," said Czubay. "This suggests the current momentum is not an aberration. We believe replacement demand will continue to support stronger levels in 2012."

Hyundai saw a 22% total sales increase and 24% retail sales increase compared with the same record-setting period a year ago. Dave Zuchowski, the automaker's EVP of national sales, said the Thanksgiving holiday weekend pushed the company over the edge. "With vehicle availability at the highest levels for the year, and with positive demand signals and improving consumer confidence, Hyundai is positioned for a very strong December finish," he said, in a release.

Chrysler saw huge numbers last month, with U.S. sales of 107,172, a 45% increase versus November last year. The Auburn Hills, Mich., company said November was the sixth-consecutive month of sales gains of at least 20%.

The biggest gains were for the Chrysler Division, which saw a 92% sales increase for the month, the largest percentage increase of any Chrysler Group brand and its best November sales since 2008, per the company.

Honda, which sold 83,925 vehicles last month, a decrease of 10.1%, is suffering from natural disasters in the east. The automaker's year-to-date sales are about 1.04 million vehicles, down 5.7% versus last year.

"The impact of the Thailand flooding on our North American production levels continued to be felt in November," said John Mendel, American Honda executive vice president of sales, in a statement. "We're looking forward to closing the year on a strong note as production recovers and the all-new CR-V goes on sale this month."

"The Camry Hybrid, which arrived in dealerships last month, has been very well received by customers and we expect it to play a much larger role than in past years," said Bob Carter, Toyota Division group vice president and general manager, Toyota Motor Sales, U.S.A., Inc., in a statement. The company also saw 19,181 hybrid vehicles roll out of dealerships last month, a 31.1% increase over November 2010.  Toyota Division posted monthly sales of 16,260 hybrids, up 30.9% compared to the same period last year.  Lexus Division reported sales of 2,921 hybrids, an increase of 32.8% over the year-ago month.