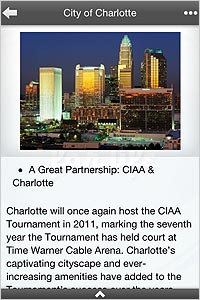 Radio One, the urban radio network with 54 stations in major U.S. markets, has  begun selling apps as part of its local advertising products suite. In a strategic partnership with rich mobile app developer Toura, Radio One will be able to bundle app creation with its broadcast radio inventory.

The first client for these services is the CIAA athletic conference for historically black colleges. Its app provides information for an upcoming tournament in Charlotte, N.C. and it part of a larger media buy, according to Dan Shelley, general manager, Radio One. He says apps have become another extension of his product mix for advertisers that is on target for his audience.

“When you look at the mobile and the tablet platforms and look at the way our niche audience consumes them and the high adoption rates in our audience, why wouldn’t we offer apps?” Shelley notes.

Radio One’s African American audience are usually early and heavy adopters of mobile media, yet many of the advertisers serving this community need an easier path into the medium.

“Many of them are crying out for help,” says Shelley. “How do they extend their brand into these new platforms as a local advertiser?” Radio One already has an extensive mobile presence of its own, with streaming media apps for all of its local stations across iOS, Android and BlackBerry. “We have those relationships already with those advertisers and institutions that fall into those niches.”

By partnering with Toura, which makes apps for Dennis Publishing, John Wiley & Sons and the Art Institute of Chicago, Radio One can offer the capability to clients without risk.

“It avoids us having to make a huge investment in infrastructure and personnel and allows us to have tremendous return on investment,” Shelley says.

Toura builds the apps and turns them over to the client, which pays a monthly fee to access the content management system that allows them to update the apps with fresh content. While he did not disclose specific costs involved, Shelley says the service is “exponentially more economical than if they were to hire many of the other companies out there that build and customize apps.”

Shelley says he is seeing tremendous interest among his radio ad clients for mobile inventory. Radio One launched its first streaming media app in Cleveland over 18 months ago because a sponsor there was interested in the idea. “They purchased a package with the mobile streaming app before we even had packages out on the street, and we are seeing a similar level of enthusiasm in all the markets we serve.”

Interest and activity around mobile advertising among local businesses is often underestimated, he says. “Some of it is just marketing messages and brand identification -- the basic and simple stuff. But some of it also is in pre-roll video or offers from QR codes and things of that nature.”

Borrell Associates recently reported that local mobile marketing spend in the U.S. would reach $1.2 billion in 2012, $800 million on advertising and another $400 billion on promotions, contests, coupons and deals.