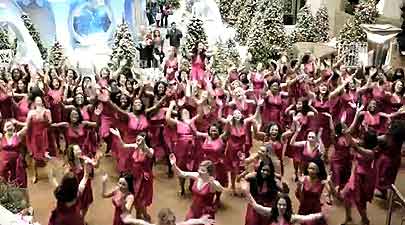 The country’s fourth-largest wireless provider is taking its signature color and style to the mall and the Internet in a new holiday-themed video that the company is hoping will go viral to spread cheer throughout the holidays.

In early December, T-Mobile hired 100 women (along with their corporate spokeswoman Carly Foulkes) to stage a surprise performance of “(There’s no place like) Home for the Holidays” in the Woodfield Mall outside of Chicago. Among unsuspecting shoppers, the women prance and sing in magenta dresses (the carrier’s signature color), encouraging the surrounding shoppers to join along. The entire performance (actually, there were about six throughout the day) was filmed by Alfonso Gomez-Rejon (who has directed several episodes of “Glee”) and edited into a three-minute video available for viewing on YouTube and through the company’s Facebook page. The overall effect is a T-Mobile meets “Glee” holiday surprise.

“The American public has really responded to ["Glee" and other types of music programming],” Trish Cox, senior director of advertising and brand at T-Mobile, tells Marketing Daily. “It’s very organic in the way it makes people feel.”

The video and performance were born out of what has become a fascination among consumers with Foulkes and her magenta dress. “One of the things that has taken hold [with the campaign] were the magenta dresses she’s wearing,” Cox says. “Over the course of time, we’ve asked ourselves what we could do to capitalize on this idea.”

The video is being promoted through rich-media banner advertising and online preview teasers, as well as through Facebook and YouTube. The video will also be sent to the company’s customers and employees as a “special holiday greeting” from the company.

“It’s certainly something we anticipate will go viral,” Cox says. Since posting the video on YouTube on Tuesday, it had already garnered nearly 50,000 views by Wednesday afternoon.

To further deepen the connection to the holidays, T-Mobile is holding a Facebook sweepstakes in which the company is encouraging its fans to write, in 100 words or less, why they want to go home to visit their families for the holidays. The company will select three winners from those entries to fulfill their dreams. The sweepstakes is all intended to reinforce the company’s position as one that is “all about connecting and sharing and providing connections and relationships among people,” Cox says.