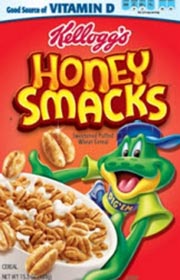 Only one in four children’s cereals would meet the voluntary nutritional guidelines proposed by the federal Interagency Working Group on Food Marketed to Children, according to a review of popular brands conducted by the Environmental Working Group (EWG).

The government agency panel recommended no more than 26% added sugar by weight. EWG, a nonprofit advocate on public health and environmental issues, found that 54 of the 84 cereals reviewed exceed those levels, and some are 40% to 50% sugar by weight.

The group looked at 39 cereals from General Mills, 25 from Kellogg, 11 from Quaker Oats and nine from Post. All of the Post children’s cereals, and 27 of the General Mills cereals, failed to meet the proposed standards.

Kellogg told Reuters that it does not market the Honey Smacks brand to children, and pointed out that the recommended serving size is 3/4 of a cup. However, EWG’s VP of research, Jane Houlihan, told Food Safety News that 3/4 of a cup of the brand has 15 grams of sugar, versus the recommended daily maximum of 12 grams, adding that some children eat a cup or more of cereal in the morning.

Elaine Kolish, director of The Council of Better Business Bureaus' Children's Food and Beverage Advertising Initiative, pointed out that prior to CFBAI’s launch in 2006, some cereals advertised to children had 15 to 16 grams of sugar per serving, whereas cereals with more than 12 grams are not advertised to children by CFBAI member food companies.

EWG maintains that food makers are fighting the IWG’s proposed voluntary guidelines because many of their brands fail to meet them. In addition to sugar levels, many of the brands reviewed were found to have sodium or fat levels in excess of the guidelines, or whole-grain levels lower than those recommended, the group reports.