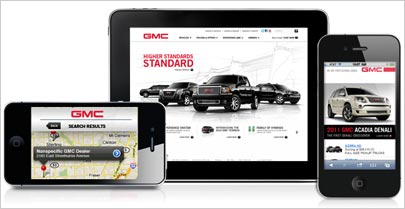 General Motors' GMC division may not have new models to boast about this year, but the brand is going strong. Sales are up nearly 20% year-to-date through November -- the 26th consecutive month of sales gains. The brand's Terrain (whose sales were up over 47% through November) and Acadia crossovers are pulling customers in from non-domestic brands, and sales of GMC's Sierra pickup truck lineup are up over 22% as well.

The company is also introducing such technology as a single-camera front-end crash avoidance system and lane-departure warning. Next year, GMC debuts the Intellilink infotainment system as an option.

And although the brand has been able to take a breather this year from launch mode, it has been a busy few months on the marketing front as well, with GMC launching Facebook programs that allow people to share the GMC vehicles they have configured via social networks, a mobile showroom app, and now a ramp-up of NFL partnership programs like "Monday Night Football Tour" with United Way to community projects in different cities. Marketing Daily talks trucks with Craig Bierley, director of GMC advertising and sales promotion.

Q: GMC has an unusual position of being one of only two exclusively truck and crossover brands in the U.S. market. Have you had to rethink the brand's positioning with the changing economy and consumer mindset?

A: I think people are making much more responsible consumer choices now. So we think [the "We are Professional Grade" theme] still fits. What we want to do is migrate the brand away from just "capability" to "technology." Capability, while it has been a defining part of the brand, is in some respects more limiting than technology. Especially now that GMC has advanced entertainment, vehicle safety systems and just more for us to talk about. It's still about Professional Grade -- we haven't changed that, but the articulation is changing.

Q: What other consumer insights are driving this articulation?

A: The GMC positioning really started back in the 1990s and any good positioning has three components: product truth, cultural truth and consumer truth. We had the cultural and product truth in the 90s when consumers had a lot of money and were buying "professional grade" everything: it was a time when the novice cook would go out and buy the most expensive oven. The guy who cuts two pieces of wood per year would go out and buy a Makita saw. We had that cultural insight -- that people were buying high-end, more than they needed -- but not the consumer insight. So there was a lot of consumerism but not a lot of consumer insight. But we have been doing a lot of ethnography, and we have found that people who GMC are "disciplined achievers." They believe something worth doing is worth doing incredibly well.

Basically, we are playing around with the idea, the inspiration line: "What's more amazing than technology is what you can do with it." It's a message about the balance of toys and tools, and not superfluous technology.

Q: Is the way Chevrolet talks about technology different from the way GMC talks about it, especially around trucks?

A: Very different. One of the things we are making a conscious effort to do is keep the [Chevrolet and GMC] truck brands apart. The pickup truck audiences for the two brands are completely different. For example, the latest pickup work with Chevy speaks to the central role trucks play in everything owners love to do. For us, when we make new pickup ads, again, it's about technology. So we are bracketing the mainstream of the pickup market, which has become something of an arms race about things like towing power and the bed [capacity].

Q: GMC has been experimenting with mobile programs, like the showroom app. Is this a growth area, in terms of engaging consumers?

A: We are seeing mobile explode, and we are finding that consumers are not just using our mobile site in dealerships, but in every part of the funnel. So we are completely rethinking our mobile experience, and will have a big investment this year and next. Our goal through next year is to have the same level of functionality from top to bottom of funnel. Our mobile site will be completely different. It belongs in our mainstream strategy.

Q: It's the fourth quarter and that means football.

A: We have been the official truck of the NFL for five or so years, with a cornerstone strategy around Monday Night Football -- including the pre-game, one-quarter exclusivity. It lets us build the contextual elements we want. Last year we created "GMC Never Say Never Moment of the Week" -- wherein each week fans can vote on three “Never Say Never Moments,” and enter for a chance to win a weekly prize of a trip for two to the Super Bowl and then vote for moment of the year among 17 weekly winners. One grand prize winner is presented with a new GMC truck during the Bowl game -- and have seen a huge benefit from the program. Because it's the second year, our overall spend is less than it was a year ago, but we have seen almost a doubling of traffic to the site, and voting is up over 130%. Essentially, we are spending less and getting more traction because it's the second year.

Q: Are you considering aligning GMC with NCAA college sports?

A: No, Buick is our corporate partner with NCAA. That is a contextual play around human achievement, with programs like the Human Highlight Reel, which we are more than delighted about. We are looking for depth and meaning [with these partnerships] -- otherwise we are just talking to ourselves. Within [the NCAA/Buick partnership] we have a human achievement and scholarship program called Buick Achievers. In the first year we offered more than $4 million in scholarships; we are going to do the same again, with a $125,000-per-year scholarship, and a lower number of scholarships.

So, typically we prefer to have brands go and create ownership: Chevrolet owns NASCAR; we built an ownership stake for Buick around the NCAA, and for GMC, it's ownership of Monday Night Football. Our goal is to build deep contextual programs.