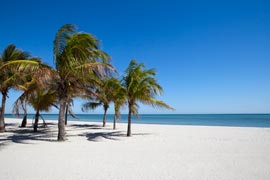 Florida's tourism marketing organization, Visit Florida, has signed on as the first destination-marketing organization to launch with Google's new mobile-content platform, Currents. The program, Visit Florida Magazine, involves travel stories published to mobile devices like smartphones and tablets that are being written and edited by a long roster of journalists from Florida's stalwart broadsheets like the Miami Herald, St. Petersburg Times, and South Florida Sun-Sentinel.

Google Currents -- which launched on Thursday for Android devices, iPads and iPhones -- allows users to explore online magazines and other content. The Currents application is at the Apple App Store and on the Android Market.

The authors, or "Florida Insiders," write feature stories for the Web and blog posts, answer questions from users on the visitFlorida.com site, take photos, and shoot informal videos as well as appearing on camera in travel pieces. They also maintain an active social media presence on Twitter and Facebook.

Also on tap via Visit Florida's relationship with Google is a pilot digital co-op ad program, which Google said it developed for the travel industry. Florida convention and visitor bureaus (CVB) will be the first beneficiaries.

The pilot program, launching Jan. 3, uses Google advertising products to deliver targeted Florida advertising. Google said Florida market partners can use the program to grow their own brand and reach travelers as they plan across Web sites, video and mobile devices.

Per Google, ads for Visit Florida partners can be placed on premium content on the Google Display Network, YouTube and the Google AdMob mobile platform. The goal with the co-branding package is to reach a national audience and key markets to inspire travel to Florida.

Will Seccombe, CMO for Visit Florida, tells Marketing Daily that for his group, the partnership with Google is about content. "We have been working with them to make sure we are at the cutting edge of what they're doing. Google has been making significant forays into travel marketing with things like PlaceFinder, and its acquisition of Zagat. So we want to partner with them whenever possible," he says.

Seccombe says that Visit Florida's involvement with Currents aligns with the organization's strategy of investing in content rather than just ads. That strategy paid off (and garnered an industry award or two in the process) in the wake of the Deepwater Horizon spill in the Gulf of Mexico, when Florida had to figure out a way to reassure Floridians and those traveling to the state that the beaches were still pristine. Instead of ads, the organization did on-the-spot, real-time documentary content by locals, personalities, bloggers, etc.

Seccombe says the content that Visit Florida has been doing with its magazine format is a perfect fit for the Currents platform in terms of the frequency and relevancy of Visit Florida content. Visit Florida also benefits by being a first mover. "I think Google entered the space in a big way with an innovative product; it's going to catch on, and being early gives us a tremendous advantage."

Florida -- which is the No. 1 travel destination for Americans visiting states other than their own, and one of the top global tourism markets -- is hoping to be No. 1 in that category as well. Seccombe says something like 1.25 million people visit the state every day. "It's an ambitious goal, but we are really close."