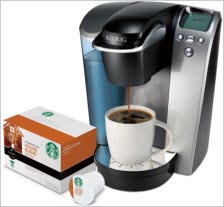 Single-serve coffee formats, a category “scarcely worth tracking” five years ago, now accounts for 7.5% of U.S. retail coffee sales, according to Packaged Facts.

A September 2011 survey conducted for its new report on coffee and ready-to-drink coffee in the U.S. found that 21% of households that make coffee, other than instant, at home own an electric single-cup coffee maker (using K-Cups, T-Discs and other formats), and that 18% use it regularly.

The single-serve market has been driving overall growth of the coffee category in the U.S. (Starbucks estimated that U.S. sales totaled approximately $2 billion last year). But it’s just getting started.

Both Starbucks and Dunkin’ Donuts have recently launched K-Cup Portion Pack sales deals with Green Mountain Coffee Roasters Inc. (GMCR), parent of Keurig and its proprietary K-Cup brewing system, which most reports estimate owns about 80% of the single-serve market.

Last month, Starbucks began selling K-Cup Portion Packs in grocery and specialty stores, with rollout in food, drug, mass, club, specialty and department store throughout the U.S. in time for the holidays. Starbucks has stated that it fully expects to build its K-Cups into a $1 billion global business over time. (In a non-retail venue, Starbucks also has an agreement with Courtesy Products to distribute single-portion servings of its brands in up to 500,000 premium hotel rooms in the U.S., offering through their own single-serve brewing system.)

Dunkin’ Donuts began selling its brand’s coffees in K-Cup Portion Packs for at-home brewing in its U.S. restaurants in August.

Keurig, which is scheduled to launch its next-gen single-portion brewing system next year, will face growing competition in both brewing systems from other major makers and single-serve coffee formats (including pods compatible with the Keurig system) from private makers, according to Canaccord Genuity analysts quoted by Forbes in October.

However, the analysts stressed that the launch of competitive products, such as a San Francisco Bay brand coffee pod from Rogers Family Co., are “another validation of how big the single-serve coffee industry will be.”

“The world of coffee brewing is changing at home and we believe the penetration won’t be a modest 20% or 25% of homes, as some assert, but 40% or 50% at a minimum,” the analysts wrote, adding that “every coffee roaster marketing for home use has to try to participate.”

As for the overall coffee market, Packaged Facts reports that U.S. retail sales will jump nearly 17% in 2011, to $7.3 billion.

Dollar sales growth in the mature coffee market is driven by higher consumer prices, and retail prices rose 13.5% in the first nine months of 2011, per Food Institute estimates quoted in the Packaged Facts report. Wholesale coffee prices actually rose by an estimated 18% during the year’s first nine months, but retailers did not pass all of that along to consumers.

Four main factors are behind higher prices, according to Packaged Facts: rising prices for "green" (raw) coffee beans that have been passed along the entire distribution chain; the "premiumization" of coffee; the nation's still-growing thirst for specialty coffee beverages; and the “phenomenal growth of single-serve coffee packet formats.”

Single-serve packs typically cost 65 cents to $1, making them considerably more expensive than brewing the same brand of coffee from loose grounds, but still less expensive than buying a comparable beverage in a coffeehouse, the researchers point out.

At the same time, private-label coffee introductions were rampant in 2011, coming from retailers as diverse as A&P, Dollar General, Trader Joe's, and Wegmans. This is “in keeping with the surging importance of store brands across packaged food and beverage categories,” Packaged Facts points out.