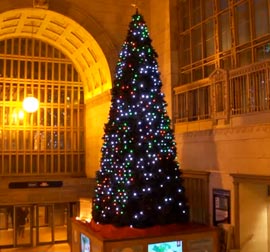 Canadian Tire, a Canadian home-improvement, gasoline, auto accessories and houseware chain, is running a pair of Web-based programs focused on a house and a Christmas tree. The retailer, which has 1,200 outlets, bought a house in a Toronto neighborhood earlier this year for the sole purpose of using it as the basis for a Web campaign at HouseofInnovation.ca that is intended to offer Web-based tutorials on home repair and improvement and tout its products in the process.

The Toronto-based company is using the site to host a series of videos filmed at the home, plus instructions, products, ideas and assorted tips on how to do different projects. The videos follow themes including energy-efficiency, lawn and garden aesthetics, home organization, repairs and replacements, outdoor space, and car maintenance.

The company says the program follows a survey done for Canadian Tire by Vision Critical showing that more than half of Canadians have five or more jobs that need to be completed. Almost the same number said they don’t know where to start or don’t have the inspiration. Almost a third said they want to be DIY consumers.

Canadian Tire, which began improvements on the home earlier this year, says that when it is complete, the house will be sold with proceeds going to Canadian Tire Jumpstart, a national charitable program that helps financially disadvantaged kids participate in organized sports and recreation.

The home-improvement survey also found that plumbing is the most dreaded job for both men and women, with 28% ranking it as the worst. Women usually prefer working with manual tools, while men opt for power tools, with 19% saying the power drill is the one tool they couldn’t live without. Both say the screwdriver is indispensable.

A second program that Canadian Tire is running involves a Christmas tree in Toronto that is wired in more ways than one. The 30-foot tree at Toronto’s Union Station has 3,000 LED lights that glow in response to the volume of real-time holiday messages on Facebook, Twitter and posts to ChristmasSpiritTree.ca. The company, which also happens to sell a lot of Christmas trees this time of year, says the tree captures holiday-themed keywords and transforms them into data that is then visualized via the lights on the tree. Canadians may also text-message “Christmas” to 70734 to affect the lights on the tree.

Posts from Twitter and other social media are represented as white lights on the tree, whereas messages from ChristmasSpiritTree.ca or text messages are visualized as a spiral of blue lights moving up the tree accompanied by flashing strobe lights. And, the brightness of the lights represents the total number of per-minute messages being shared across the country -- so at times when online sharing is at its highest, the tree will shine at its brightest.