Cars Ads Bearing Gifts? No, Thanks 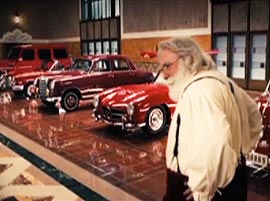 And the wise men, following their GPS systems, drove their Hondas, Chevrolets, Toyotas, Nissans, Hyundais, BMWs, and Lexae (sic) to Bethlehem. Okay, maybe not, but this is certainly the time of year when a veritable caravan of auto ads rolls across the video desert bearing gifts in the form of year-end deals, incentives, promotions, close-outs, mistletoe and a dab of frankincense for good measure.

Ad tracking firm Ace Metrix says there are more than 150 new ads, but the reception from U.S. consumers this quarter to those car-as-gift pitches suggests automakers are way off base. Ace Metrix scores and consumer comments to the firm's surveys show people are almost as enthusiastic about those luxury-car-in-the-snow-with-trees tableaux as King Herod was when he heard that a certain child king had decamped to Egypt. Okay, maybe not that unhappy, but certainly consumers are blasé, if Ace results are believable.

The company has released its list of the most effective luxury and non-luxury automotive ads to break so far this quarter. Non-luxury did better than luxury, and Chevrolet led the non-luxury automotive category in effectiveness, a departure from last year when luxury brands out-performed non-luxury brands in effectiveness. It's not (just) because of the economy, or that consumers no longer aspire to own a high-end vehicle. While people are probably over the whole idea that there are folks out there who can buy their spouse a new luxury car for Christmas, the real problem is that year-end creative tends to veer away from brand equity or -- to borrow an image favored by GM marketing chief Joel Ewanick -- takes brands out of their "swim lanes" and directs them into the reviled tier-three “Buy Now!” ad pool.

“Consumers tend to dislike sales event promotional ads, yet this year, many brands opted for this type of messaging instead of better-performing, more creative brand/product messaging,” said Peter Daboll, CEO of Ace Metrix. He tells Marketing Daily he was surprised that even the leading luxury automotive ads were below normal, a sign that brands have are focusing on sales events.

Daboll says response to the "Buy It Now" creative "is almost outrage, as well as disbelief that the sales as stated actually exist, that the financing rates apply to real people. It shows automakers have misjudged the negative impact of these ads." He says automakers like to run them probably because they see the seasonal uptick and correlate it – mistakenly, he says – to those ads.

Consumer comments in the firm's survey are clear as a frosty winter night:  “It’s the Christmas car bow ad…I think advertisers should know we’re tired of these and they should do something else…”; and “How many times are car companies going to show a car as a Christmas gift?....It makes me NOT want to buy [from them],” are examples from the syndicated study.

Daboll says that the scores are not a reflection of an either/or creative strategy where automakers are doing either sales messages or brand building, but the relative mix of the two approaches. "But with brands like Lexus, it looks like they pulled back on the brand and are favoring these kinds of promotion ads at this time of year. It's a mix issue: they are going heavier into promotion," he says.

Lexus, which has an affinity for the red bow motif and "December to Remember" mantra, was not present in the rankings. The firm says the company's 14% drop in its average Ace Score to 504 from above 550, put them below the luxury automotive category median score. The firm quotes one consumer's response: "People don't buy other people cars, and even if they did, do you think hearing one annoying jingle would really clue them into the fact they were getting a new car? No!"

He says Lexus dropped probably because last year there was a much bigger focus for them on fuel efficiency and hybrid models, and more on-brand messaging. "Now they are blasting the sales promo ads, so it's about setting the right balance. The surprising part is that you would think the luxury brands would tone that down; it comes across as a little desperate."

The firm says that Cadillac, Audi and Mercedes-Benz did get their holiday messages right with Ace Scores above the norm.  In addition, ads longer than the standard 30 seconds dominated both lists. “One trend we are seeing a lot of is what we’re calling ‘the return of story-telling’—longer spots that allow a brand to tell a story,” Daboll commented. “Chevy’s top-ranking ads are a great example of this, as is the top-ranking Thomas Keller BMW ad.”

Indeed, Chevrolet had the top two and fourth place ads in effectiveness, with Hyundai at number three. Mitsubishi came in at number five with "Welcome to the New Normal." Volkswagen was next, and then Ford and Toyota rounded out the top 11 ads. After BMW's leading spot, Cadillac, Audi, Mercedes-Benz, Infiniti, Caddie again, Infiniti again, Lincoln, Jaguar and Infiniti yet again around out the luxury scores.